A new generation of investors has taken over corners of Wall Street. By gathering on social media sites like Reddit’s r/WallStreetBets, Stocktwits and Discord, these younger investors are upending the notion of what “investing” is all about…

…And taking down short-selling hedge funds that stand in their way.

Millionaires have been created virtually overnight in this new economy. r/WallStreetBets superstar Keith Gill (aka “Roaring Kitty”) allegedly earned over $48 million on the GameStop (NYSE:GME) mania. Those who bought Shiba Inu (SHIB-USD) and Dogecoin (DOGE-USD) early on saw even more percentage gains.

Ordinary investors have also profited. Ask my younger friends about AMC Entertainment (NYSE:AMC), and you’ll see their faces light up with glee over their thousand-dollar wins.

Many of these investors have little in the way of “classical” stock training (DCF modeling, accounting, financial analysis, etc.) and make the same mistakes that novices tend to do (holding on too long, investing too much, writing uncovered options).

But many have also stumbled upon strategies that Wall Street has long used. Momentum, value, swing trading, growth and personal morals heavily feature in their investing ethos.

By jumping headfirst into the stock market’s deep end, these investors are teaching us a great deal about becoming stock market millionaires.

The Dangers of Swarm Investing

There are, however, several things to make clear.

First, meme stock investors also get a lot wrong. Many blindly follow others into hyped-up stocks, only to lose everything on the way down. Those who profit are usually early to enter and early to leave.

Second, the average retail investor underperforms the market, net of trading fees. Newer investors fare even worse; a working paper by Californian researchers found that “trades by retail investors with less knowledge, experience, and wealth are more likely to underperform.”

Third, many popular meme stock strategies are zero-sum games. Investments in crypto tokens, penny stocks and NFTs only serve to transfer money from one party to another, often with a hefty “house take” on each transaction.

Finally, there’s surprisingly little glamor in the winning strategies of meme stock investors. Hard work, research, and a willingness to take gains are all necessary factors to becoming a stock market millionaire.

But for those willing to take a closer look, some winning strategies do emerge from these meme stock traders.

1. Fear Is the Ultimate Motivator

When was the last time you ate broccoli?

If you were like my late father, the only way he would get greens on his plate was by fear.

The same base emotions have driven millions of first-time investors into the stock market.

It’s what so many investment guides miss the mark. Unless they’re instilling a real motivator (whether fear or greed), they will eventually end up like most broccoli cookbooks — unread and gathering dust on a high bookshelf.

GameStop… AMC Entertainment… Bed Bath & Beyond… do these near-bankrupt companies provide a dependable source of returns?

To find out, I took all firms in the broad-based Russell 3000 index and divided them by quintile of “Z-score,” a standard measure of company solvency. Lower scores indicate a firm near bankruptcy, while higher scores suggest healthier financials. The system then holds stocks for a 12-month period and rebalances holdings annually.

It turns out the high-risk strategy works.

Below is the data since 2013 during the latest business cycle. (Longer periods show a similar conclusion). 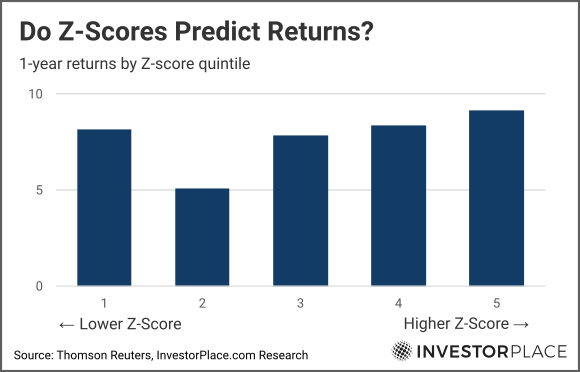 In other words, companies with low Z-scores can surprisingly outperform.

And if investors can avoid companies that go bankrupt, the performance improves even further. Here are the same results run through a “crystal ball” that removes all de-listed companies. Such a portfolio returns upwards of 23% per year. 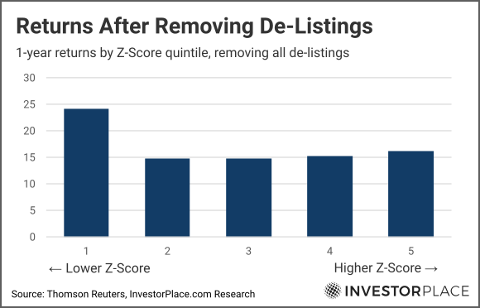 These are fascinating results. Not only are struggling turnarounds like GameStop a source of potentially high returns. As the data shows, they’re some of the best ways of beating the market if you know your way around a balance sheet.

So, how can investors differentiate between the companies that will go bankrupt from those that survive?

The concept is straightforward. By pushing an asset’s price in a particular direction, traders can occasionally create a self-fulfilling prophecy that ultimately comes true.

Consider the 1997 Asian financial crisis. When foreign exchange traders began selling the Thai baht, its devaluation made the Thai government’s foreign debts more expensive to service. That increased the chance of sovereign default, devalued the Thai baht further, and so on. It’s a strategy that currency traders use to keep spendthrift governments in check.

A similar effect is now finding its way into meme stock investing, where rising share prices make it easier for firms to pay off debts and survive.

During the meme stock mania of 2021, AMC Entertainment used its inflated share price to raise over $2 billion of new equity to fund its pandemic-era cash burn and come out ahead. Rival Alamo Drafthouse Cinemas, on the other hand, would file for bankruptcy in March 2021. And Regal owner Cineworld (OTCMKTS:CNNWF) is barely treading water after putting itself $4.6 billion in debt.

In a very real sense, meme investors had crowned the winner of the consolidating cinema industry before the fight had even begun.

Similarly, it turns out that buying deep-value firms like AMC Entertainment works well beyond swarm trading.

To reach this conclusion, I took the same Thomson Reuters data and divided companies into five quintiles of price/sales ratios. Companies are bought three months after the calendar end to allow time for reporting and held for 12 months. 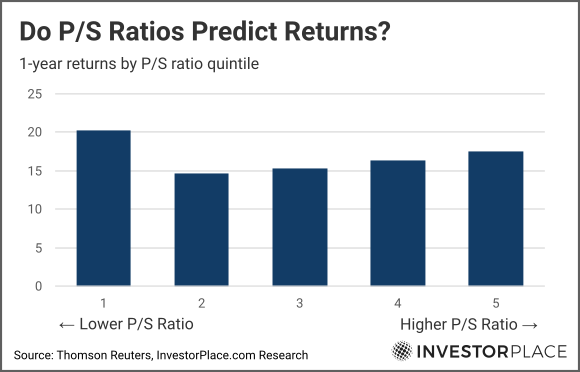 It turns out that price/sales ratios are the most powerful value ratio in predicting outperformance — more than twice as effective as P/E ratios. Companies in the cheapest quintile by that metric outperform the average by almost 5% per year.

The conclusion should come as no surprise to Wall Street pros. Low price/sales companies have long been targets for activist investors seeking to increase margins and sell at a profit. When your company makes a 2% net margin, every percentage of improvement goes much further.

…as can buying the lowest-momentum stocks. (Just don’t buy the ones in between). 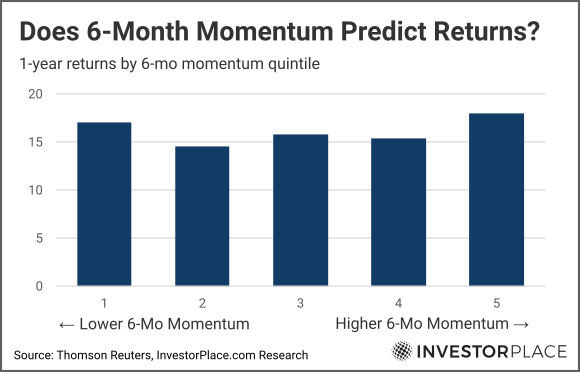 On a longer timeframe, the results become even more pronounced. A study by fund manager Jim O’Shaughnessy found that buying the 50 highest-momentum large-cap stocks since 1951 would have turned a $10,000 investment in 1951 into $12.6 million by 2003, an 18.4% average rate of return. The same $10,000 would have grown only to $3.1 million in a diversified mix of large-cap stocks.

These truisms have found their way into meme stock investing. Cannabis and energy-based meme stocks only became popular once they started rising. 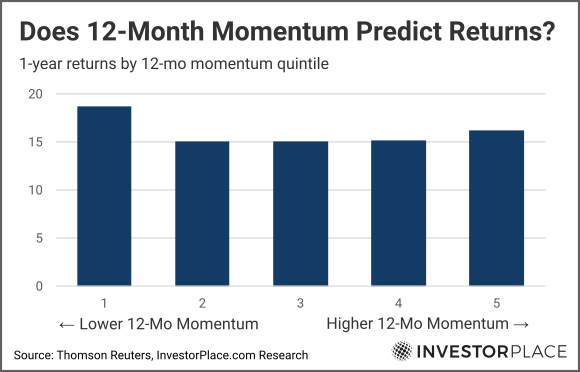 According to an analysis by Dresdner Kleinwort, 10 stocks are all you need for 85% of possible diversification. By the time investors add 30 names, they would have eliminated virtually all systemic risk. 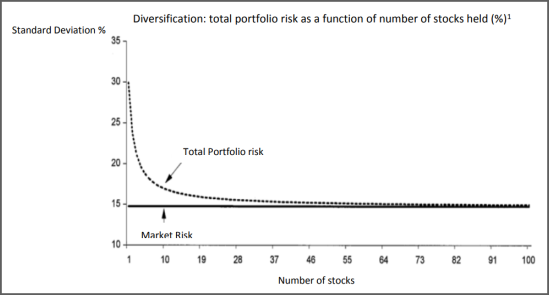 It’s why InvestorPlace’s Omnia Portfolio — a portfolio I help oversee — holds only 12 stocks. When you’re choosing only the highest-conviction stocks of top analysts, you’re more worried about “diworsification,” the practice of picking up weak investments for the sake of diversification.

That’s far too risky, even for investors who don’t need the money.

But as master investors from Warren Buffett to Peter Lynch have shown, it’s often better to concentrate bets on a dozen or so names you believe in, rather than spread bets too thin.

Investors on Reddit’s r/WallStreetBets are often mistaken for a monolith – a single-minded entity that moves together.

That couldn’t be further from the truth.

Instead, retail traders consist of early movers, mid-stage investors and latecomers. Investors like GameStop’s Keith Gill would establish positions months before other traders got in and take profits off the table just as markets peaked.

A study by CNBC found that meme stocks tend to peak nine trading days into a mania – or about two weeks. And many of the top performers, including Mr. Gill and Bed Bath & Beyond trader Jake Freeman, will quickly take profits along the way.

The Profit & Protection playbook has long understood the Federal Reserve’s power, especially when it comes to “long duration” assets. Higher discount rates decrease the value of future profits and lower asset prices. Declining discount rates do the opposite.

Meme investors, however, cut through this techno-jargon to come to the same conclusion.

A 2005 paper written by former Fed Chair Ben Bernanke with fellow researcher Kenneth Kutter finds that a 25-point cut in the Federal funds target rate is associated with about a 1% increase in stock indices. Quantitative easing and Covid-19 stimulus checks have since only created more ways for the Fed to influence the market.

These truths have found their way into meme stock investing, with risky meme stocks and cryptocurrencies ebbing and flowing with the news from the Fed.

9. Just Get Started (and Try to Have Fun)

Every generation seems to have a catalyst that sends people into investments.

The Silent Generation had the “Nifty Fifty” stocks…

…Gen X had the dot-com revolution…

…And today’s investors have meme stocks.

Not all of these investments are great ideas. Many “Nifty Fifty” stocks would lose 80% or more when the bubble burst in the 1970s, as would dot-com stocks almost three decades later.

But they did get young investors excited about their financial future.

Stock trading platform Robinhood (NASDAQ:HOOD) now counts 23 million users on its site, up from a half million in 2014. And almost 90% of millennials now invest their money, according to a study by market research firm Clutch.

To come full circle to the broccoli analogy, not everyone eats healthily (even though they know they should). But meme stock investors – for all their faults and follies – have used the meme mania to get themselves started down the right path.

Tom Yeung is a market analyst and portfolio manager of the Omnia Portfolio, the highest-tier subscription at InvestorPlace. He is the former editor of Tom Yeung’s Profit & Protection, a free e-letter about investing to profit in good times and protecting gains during the bad.