Following a strong session for equities, Apple and Amazon bolstered bullish sentiment in the afterhours session after delivering strong quarterly results and upbeat guidance. Following this morning’s GDP print, markets had pushed higher as traders braced for results from these heavyweight names. Recession fears and slowing economic activity has brought Treasury yields well off cycle highs which has allowed risk to flourish of late. With yesterday’s FOMC rate hike bringing the Fed to their “neutral” range, markets have rushed to price in a less aggressive Federal Reserve in the months ahead. While growth fears will remain, a robust period of corporate earnings may allow for some continuation of recent bullish momentum.

Amazon shares jumped as much as 12% following the closing bell as the retail giant beat top-line estimates and delivered upbeat guidance. Despite dealing with higher costs, innovation and investments in robot technologies in Amazon warehouses allowed the company to make significant progress on controlling costs. The company reported a $3.9B loss on its investment in EV startup Rivian. Amazon Web Services (AWS) and ad revenue both beat Wall Street estimates, which compares to disappointing ad revenue numbers from tech peers such as Facebook and Alphabet.

Apple shares pushed slightly higher after the closing bell as the company reported beats on top and bottom-line estimates. While the company did not give any guidance, CEO Tim Cook revealed that he believes revenue will accelerate in the coming quarter despite “some pockets of softness.” While growth slowed, management remained upbeat given the “challenging operating environment.” Recession fears have forced tech and chip companies to roll back estimates for smart device sales. iPhone sales beat forecasts, coming in at $40.67B. Mac sales struggled in the quarter, with Tim Cook citing a strong US Dollar and supply constraints for the underperformance. 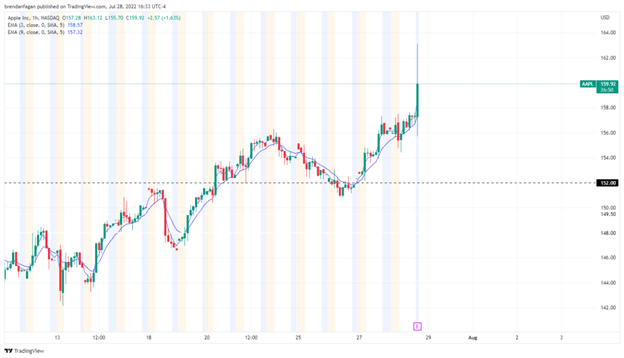 Unlike it’s tech peers, Intel shares cratered as the company reported an unprofitable quarter while also slashing guidance. Shares fell as much as 11% as both revenue and earnings came in shy of Wall Street estimates, with CEO Pat Gelsinger stating the results “were below the standards we have set for the company and our shareholders.” Management offered full-year guidance that was also shy of estimates, with the company now expecting full-year EPS of $2.30 vs. $3.60 exp. While enterprise has continued to do well, small and medium sized businesses have slowed orders for Intel products, stated David Zinsner. 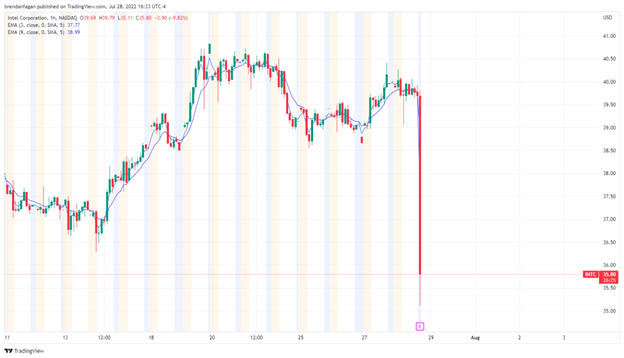 Whether you are a new or experienced trader, we have several resources available to help you; indicator for tracking trader sentiment, quarterly trading forecasts, analytical and educational webinars held daily, trading guides to help you improve trading performance, and one specifically for those who are new to forex.