June 2022 CPI 1.8%qtr vs 1.7% forecast; Trimmed Mean 1.5% vs 1.4% forecast. The CPI came in broadly as expected even with food, clothing & footwear, household furniture, equipment & services surprising to the high side. 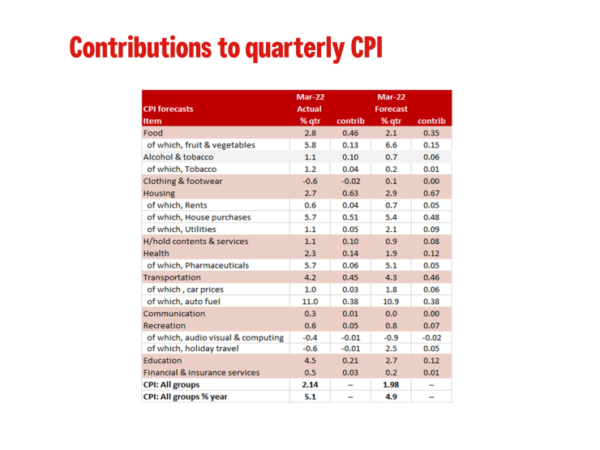 The CPI gained 1.8% in the June quarter splitting the difference between the market median of 1.9% and Westpac’s forecast of 1.7%. At two decimal places it was 1.78% so a firm 1.8%%. This increase was the second highest since the introduction of the GST and follows on from a 2.1% increase in the March quarter.

The impact of HomeBuilder grants was there but it is less significant than in recent history. The more important story now for new dwelling inflation is the shortages of building supplies and labour, heightened freight costs and strong demand – these factors are also significant for the broader inflationary pulse we are now observing.

In June, automotive fuel reached a record level for the fourth consecutive quarter. Fuel prices rose strongly over May and June, following a fall in April, due to the 22c temporary cut in the fuel excise. 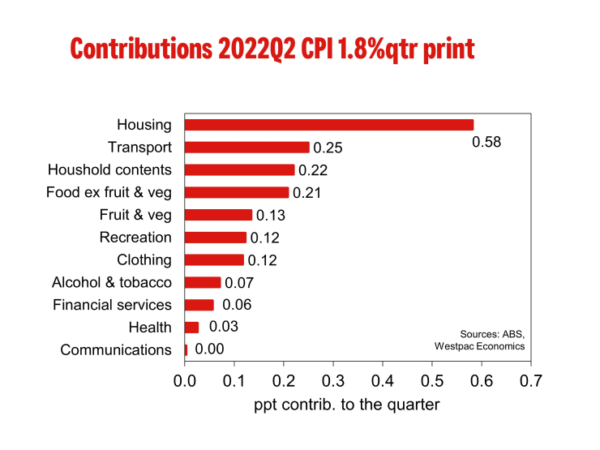 This broad spread inflationary pulse was captured by 1.5% gain in the trimmed mean, the market was forecasting 1.5%, Westpac was expecting 1.4%. It is also worth noting that the March quarter trimmed mean was revised from 1.4% to 1.5%. The annual pace of the trimmed mean lifted from 3.7%yr in March to 4.9%yr in June, the fastest pace since September 1991 (using the RBA’s historical estimates). 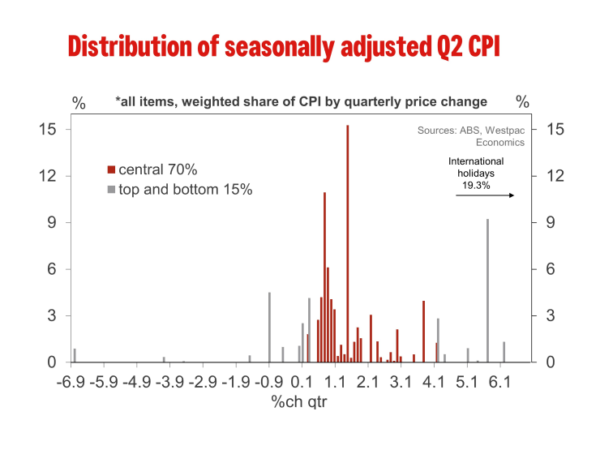 The ABS reports that annual goods inflation was the highest since 1987, as the impacts of supply disruptions, rising shipping costs and other global and domestic inflationary factors flowed through the economy.

The widespread nature of this inflationary pulse was further emphasised by the rise in the share of components of the CPI running faster than a 2.5%yr pace. The share lifted from 66% to 72.4% well up from 29% reported just back in September 2021; 72.4% is the largest share of the CPI components running faster than 2.5%yr since June 2001 75.3% (you have to go back to early 1991 to find a larger share). 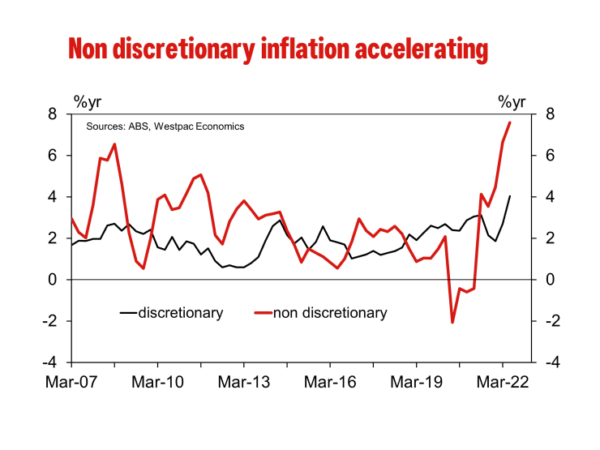 In their report the ABS noted that the price of goods (2.6%) continued to rise more strongly than that of services (0.6%) in the June quarter. As noted above it was in food and the furnishings, household equipment & services. Main contributors to the rise in food prices included vegetables (7.3% vs 4.8% WBC), meals out and takeaway foods (1.4% vs 0.2% WBC), and fruit (3.7% vs 6.3% WBC). Supply chain disruptions due to flooding events, labour shortages, and rising freight costs contributed to higher prices. Furniture prices rose (7.0% 3.1% WBC) due to increased transport and material costs as well as stock shortages.

Services recorded a smaller rise compared with goods. Financial services (1.2% vs 0.4% WBC) and holiday travel and accommodation (2.3% vs 2.0% WBC) rose. Child care (-7.3% vs 1.0% WBC) fell as the full effect of additional child care subsidies for families with two or more children under the age of 6, which commenced on 7th March, flowed through into this quarter. Before and after school care vouchers offered by the NSW Government also contributed to the fall in child care costs. Urban transport fares (-4.4% vs 0.6% WBC) fell due to free travel periods introduced by the NSW and Tasmanian State Governments within the quarter.

We are processing this data and will review the implications for our CPI forecasts. 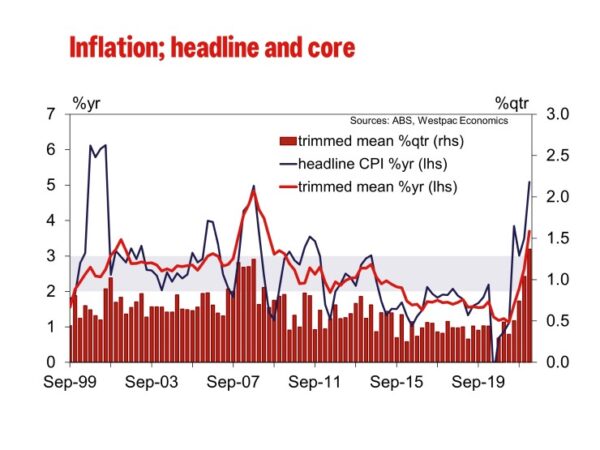