The Dow Jones Industrial Average rose during its recent trading at the intraday levels, to achieve gains in its last sessions by 1.29%. It added about 416.33 points and to settle at the end of trading at the level of 32,812.501, after it declined during Tuesday’s trading by -0.23%.

After falling on Tuesday, stocks rose back into trading on Wednesday as House Speaker Nancy Pelosi left Taiwan and China did not take any immediate military action.

Better-than-expected economic data released on Wednesday also helped stocks rally. The ISM Non-Manufacturing PMI rose to 56.7 in July from 55.3 in June. Analysts polled on FactSet had expected a reading of around 53.5.

Meanwhile, St. Louis Fed President James Bullard told CNBC on Wednesday that he does not believe the US has entered a recession, and Richmond Fed President Thomas Barkin on Wednesday joined policymakers saying the US central bank is committed to setting inflation. under control and brought him back to his 2% target.

Investors are now looking to Friday’s jobs data from the Bureau of Labor Statistics to see if the labor market slumped in July. After the summary of job creation and labor turnover released on Tuesday by the BLS showed that 10.7 million jobs were added in June, the lowest level since September of 2021. This may be a sign that the hot labor market is declining.

Technically, the index rose in its last sessions, supported by the continuation of its trading above its simple moving average for the previous 50 days. The dominant trend remains the corrective bearish trend in the short term along a slope line, as shown in the attached chart for a (daily) period. The start of the influx of negative signals Relative strength indicators, after reaching overbought areas.

Therefore, we still expect the index to return to decline during its upcoming trading, as long as the pivotal resistance level 33,240 remains intact, to target the first support levels at 31,885. 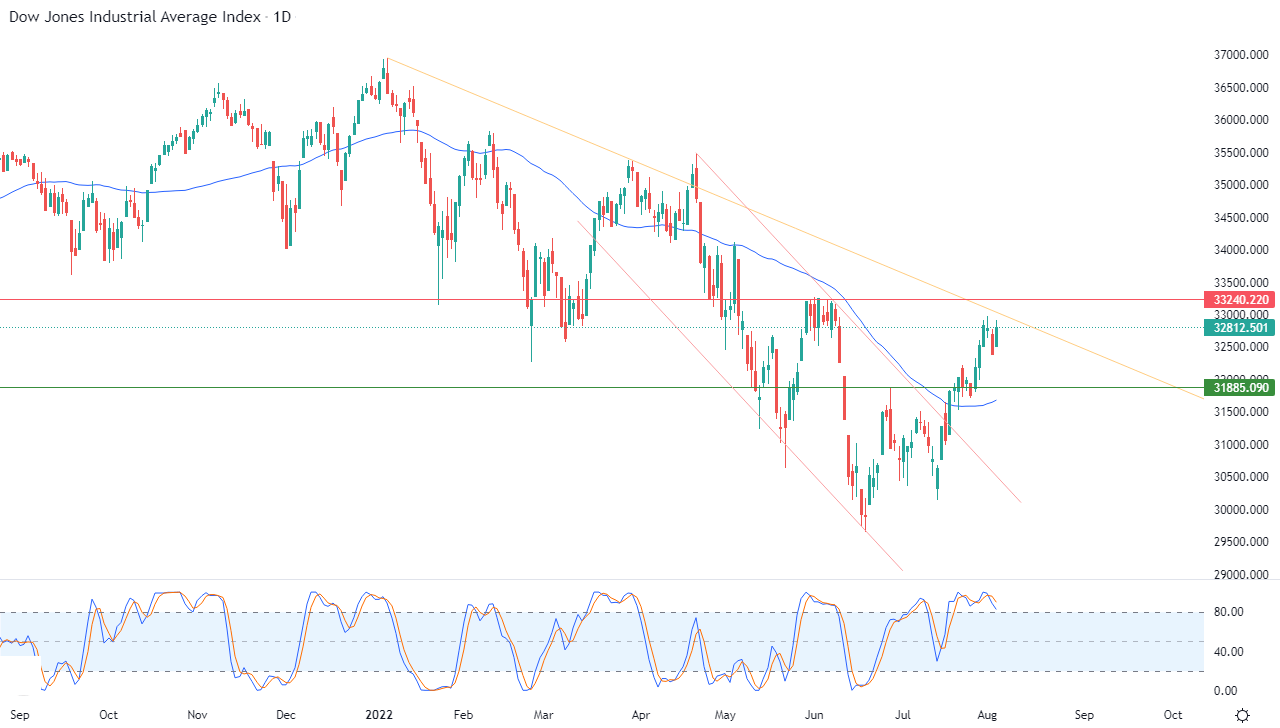 Ready to trade the Dow Jones in Forex? Here’s a list of some of the best CFD brokers to check out.