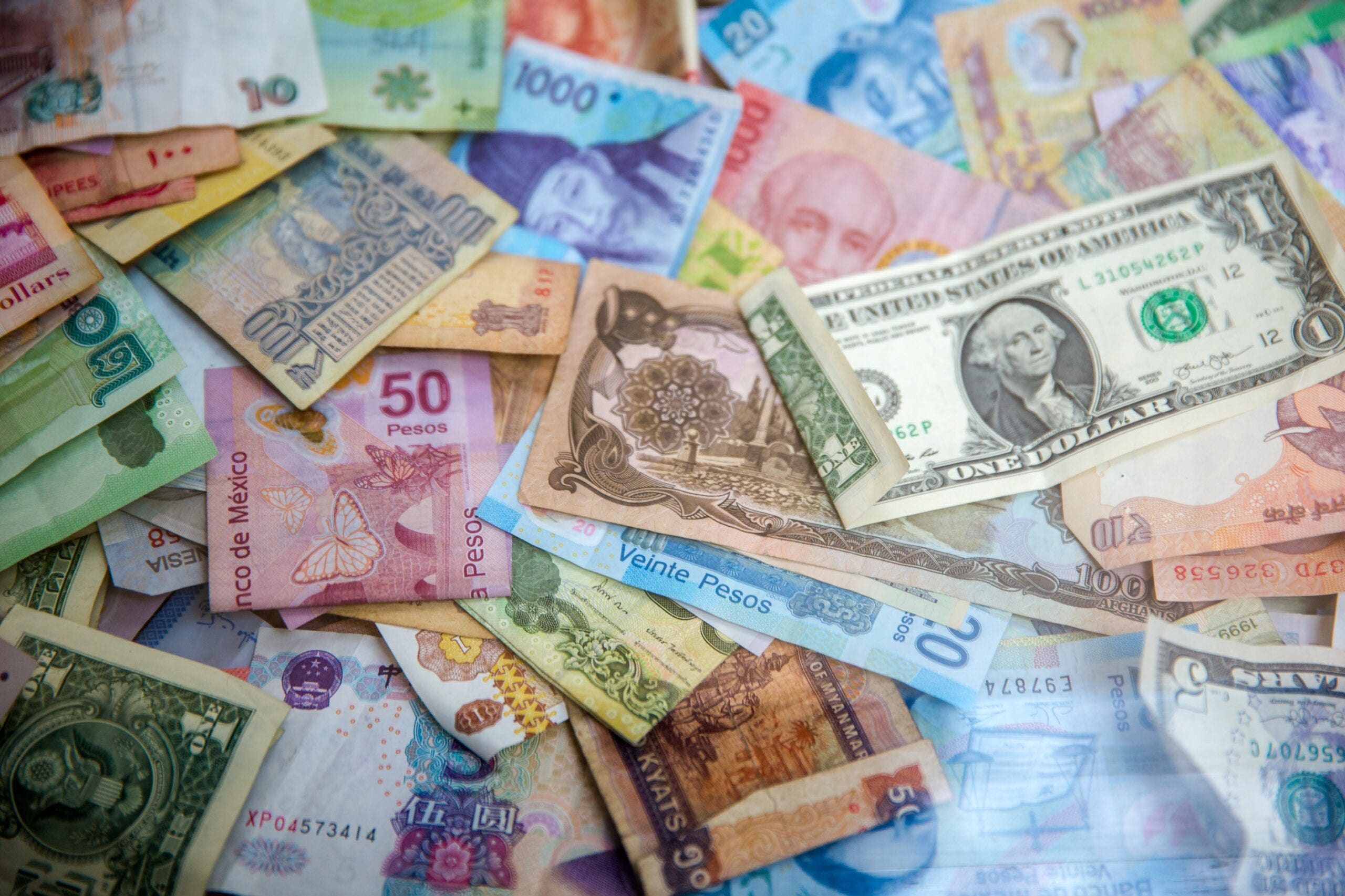 It’s been a bad year for sterling. The pound has taken a pummelling at the hands of the dollar in recent weeks, slumping in value to a near 40-year low against the ‘greenback’.

The euro hasn’t fared much better, and now stands almost at parity with the dollar for the first time in 20 years.

A plunging pound means anything we import is more expensive, not least oil. And UK holidaymakers might find their pounds buy less currency when they head overseas.

But volatile currency movements are a reminder there’s potentially money to be made from foreign exchange trading, which has opened up to retail investors – the likes of you and me – in recent years.

Here’s a lowdown on the foreign exchange market, including how it works, points to bear in mind, plus a look at suitable trading platforms.

Note that any form of market-based investment or speculation carries with it an element of risk. Investments can go up and down in value, so you may lose some or all of your money.

What is foreign exchange trading?

When you convert pounds into a foreign currency at a bank, bureau de change, Post Office or a travel agency before heading abroad, you’ve carried out a forex transaction. Forex dealers execute similar trades, but on a larger scale.

The forex market has traditionally been the preserve of financial institutions and wealthy individuals, but thanks to the march of technology, forex is attracting the attention of private investors.

Why is forex traded?

There are several reasons. One is to hedge against international currency and interest rate risk (hedging is where you secure a financial position from the risk of making a loss).

This is topical at the moment, as economies grapple with inflation and pressure on the need for interest rate rises.

Forex is also used to speculate on the impact of geo-political events such as Russia’s war with Ukraine.

Political events and natural disasters have the potential to alter the strength of a country’s currency, all of which can lead to potential trading gains or losses.

Companies also make use of forex. Corporations with overseas locations, for example, rely on forex to hedge currency risk from transactions carried out by their subsidiaries around the world.

Forex can also provide diversification within an investment portfolio. The forex market is open 24 hours a day, five days a week (see below), so it provides traders with the opportunity to react to news that might not affect a particular country’s stock exchange till much later.

National stock exchanges, such as those in London, New York and Hong Kong, work to specific local opening hours and are therefore start-stop in nature.

When trading has stopped in one location, the forex market continues in another. Forex is also traded in Zurich, Frankfurt, Hong Kong, Singapore and Paris.

Unlike the holidaymaker who needs foreign notes and coins, forex traders aren’t necessarily looking to take physical delivery of the currencies.

Most forex trading takes place between institutions working on behalf of ultra-wealthy individuals, banks, other financial organisations and multinational companies.

Thanks to the internet, private investors now make up a small and growing part of the forex landscape.

How does forex work?

Forex trading involves the speculative buying and selling of currencies in the hunt for a profit. It can also be employed to ‘hedge’ existing currency bets against a backdrop of exchange rate fluctuations.

As well as being the largest market in the world, it’s also the most actively traded.

The numbers are colossal. According to the latest three-year report from the Bank of International Settlements, global forex trading stood at $6.6 trillion daily in 2019. That’s roughly twice the UK’s annual gross domestic product.

Economic indicators used to analyse the forex market include interest and inflation rates, a country’s balance of payments, its economic policies and attitude towards intervention in currency markets.

Forex trading takes place ‘over the counter’ (OTC), which means there’s no physical exchange of the underlying currency. Instead, a network of banks and financial institutions oversee the market.

Whether you should consider forex trading depends on your financial circumstances as well as your market knowledge and appetite for risk. As with any market-based speculative venture, there’s always the possibility that trades can go against you and that you lose money as a result.

The main aim with forex trading is to predict if the value of one currency will increase or decrease relative to another.

How are currencies traded?

Each of the world’s currencies has a three-letter code. The most-traded currency worldwide is the US dollar, with the ticker USD. The second most popular is the euro (EUR), followed by the Japanese Yen (JPY), the British pound (GBP), the Australian dollar (AUD), Canadian dollar (CAD), Swiss franc (CHF) and the New Zealand dollar (NZD).

There are more than 170 currencies in all worldwide.

In forex, currencies are always traded in ‘pairs’. This is because when you buy one currency, you simultaneously sell the other.

The following currency pairs are known as the ‘majors’ and account for about three-quarters of all trading in the forex market: EUR/USD, USD/JPY, GBP/USD, AUD/USD, USD/CAD,USD/CHF, NZD/USD.

‘Minors’ refer to other combinations of the world’s largest currencies, such as GBP/EUR.

Each currency pair is made up of two elements. The first is the ‘base currency’. When listed in a trading quote, this part is always equal to 1. The second element is the ‘quote currency’.

Spot market. This is the main forex market where currency pairs are swapped and exchange rates are evaluated in real-time, based on supply and demand.

Forward market. This is where forex traders enter into binding contracts with each other, locking into a particular exchange rate for an agreed amount of currency at a future date.

Futures market. This is where traders take out a standard contract on a dedicated exchange to buy or sell a pre-agreed amount of currency at a specific exchange rate on a future date.

As with the financial landscape in general, forex is awash with its own jargon:

Currency pair. In addition to the majors and minors above, ‘exotics’ involve pairs that include less-traded currencies such as the Mexican peso (MXN).

Pips. A pip in forex is usually a one-digit movement in the fourth decimal place of a currency pair. So if GBP/EUR moves from €1.16261 to €1.16371, then it has moved by a single pip. A price movement at the fifth decimal place is known as a ‘pipette’. (An exception to the pip rule is when the Japanese Yen is the quote currency. In this case, a pip is calculated as a one-digit move in the second number after the decimal point. If USD/JPY alters from 110.05 to 110.02, this is a three-pip move.)

Leverage. Another term for borrowing money, enabling traders to play the forex market for larger amounts of money.

Margin. The deposit required to use leverage with your trades.

Another piece of forex jargon you’re likely to come across is ‘lot’. Even a 50-pip move won’t earn an FX trader very much if he/she is working in 100 or 500 units of currency. That’s why FX traders buy and sell currencies in ‘lots’ – batches of currencies that enable them to exploit relatively small price moves.

A standard lot is equivalent to trading 100,000 units of currency. Buying one lot of EUR/USD means buying 100,000 euros for their value in US dollars.

This is where traders use leverage (see above) to avoid having to tie up all their capital in a trading position. With leverage, you only have to put up a fraction (the margin) of your position’s full value to open a trade.

Leveraged trading is risky, however, because losses can be magnified until they exceed the initial amount borrowed.

You can choose from a number of online platforms run by forex brokers, as well as several trading apps. We run through some providers below.

Make sure your provider is regulated in the UK by the Financial Conduct Authority. Funds should be held in a segregated account so that, should your broker go bust, your money will be safe.

Have a clear idea about the sorts of trades you might want to make and find out how much it’s going to cost. Bear in mind that the more obscure the currency pair, the wider the spread is likely to be to support the trade.

If you’re a novice trader, look out for providers that offer online tutorials or give you the option to practise trades on demonstration accounts with virtual money.

As the FX market is one that never sleeps (except at the weekend), 24-hour customer support from your provider of choice may also prove useful.

Some services allow you automatically to open and close positions once certain levels of trading have been reached, ensuring your account is not subject to an unforeseen trading surprise.

To be a proficient forex trader, it’s essential to research your chosen currencies. For example, you’ll need to know in advance the dates when countries publicise economic announcements such as GDP figures, balance of payments, inflation rates and so on.

Equity markets, interest rate announcements and news developments all have a role to play in a currency’s strength or weakness.

Would-be traders are faced with an array of apps and platforms offering forex services. Here is a sample of FCA-regulated providers, listed in alphabetical order, that offer forex trading options to UK investors.

City Index is a global CFD and FX broker founded in 1983. The company offers two ways to trade forex: spread betting and spot FX through its CFD and MT4 accounts. The latter offers 80+ global FX pairs including EUR/USD, GBP/USD and USD/JPY.

City Index claims that more than 99% of its trades are executed in less than one second. Customer support is available 24 hours a day, 5 days a week.

The City Index Academy offers courses, lessons and webinars covering a range of subjects including an insight into forex.

Founded in 1989, CMC Markets is a UK-based financial services company that offers online trading in a range of markets including shares, spread betting and forex.

The service’s web and mobile trading platforms are well designed and highly customisable.

CMC claims to offer traders more forex pairs – 330 – than any of its rivals. Forex fees are low, from 0.7 pips, and there is no charge for most deposit and withdrawal options.

The website contains forex trading guides including modules on forex trading for beginners, trading examples and strategies and explainers on margin.

Forex.com is part of Stone X Financial whose parent company, StoneX Group, is listed on the US Nasdaq stock exchange.

All forex markets at FOREX.com are spot forex, where FOREX.com trades OTC on behalf of the customer.

Traders have access to over 80 FX pairs where the EUR/USD spread is as low as 0.8 pips.

Users can develop their trading skills via the FOREX.com training academy with sections aimed at beginner, intermediate and advanced traders.

IG offers forex traders the option to go long or short, 24-hour trading and over 80 currency pairs including majors, minors and exotics (such as USD/MXN).

Tools are available to traders including price alerts, trading signals and technical indicators.

The IG Academy produces educational tools and forex trading courses. Novice traders can set up a free demonstration account with risk-free access to £10,000 in virtual funds with which to practise trading.

Interactive Brokers’ flagship platform is Trader Workstation. Its Client Portal platform is aimed at less experienced traders who don’t require all the bells and whistles of a full-blown trading system.

The company offers access to over a hundred currency pairs based around 24 currencies including USD, GBP, EUR, AUD CAD and CHF.

FX Trader provides an optimised trading interface with tools built for the currency markets, including real-time streaming quotes, up and down indicators, and trading volumes.