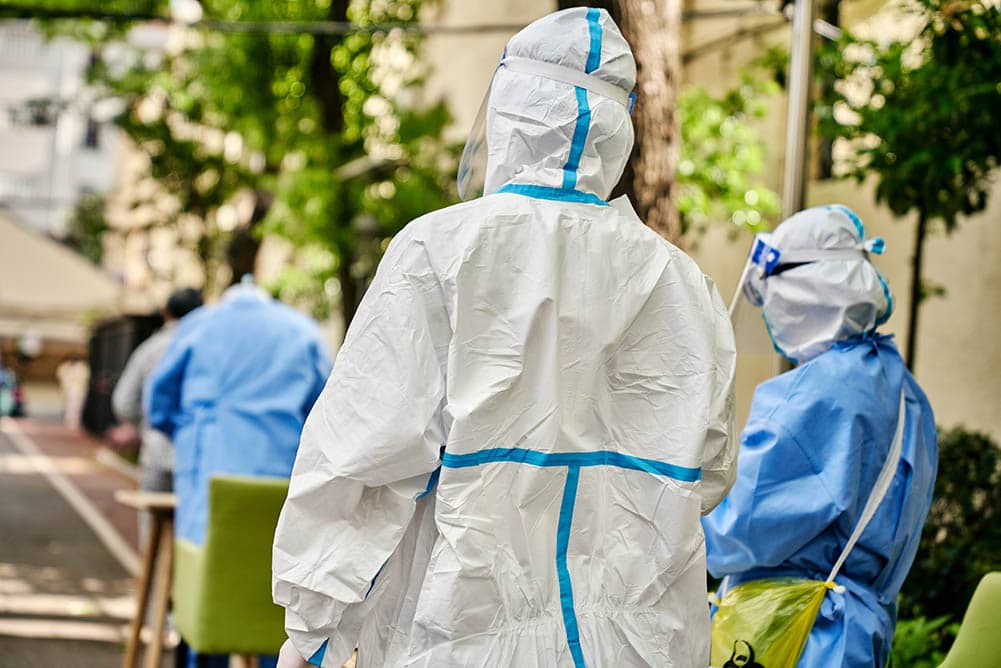 The Dollar was in demand at the start of the new week amidst a decline in global equity markets linked to fresh Covid-19 lockdowns in China and fears Russia could turn off its gas supplies to Europe for good.

The Nordstream 1 gas pipeline from Russia to the EU was closed on Monday for a scheduled ten day maintenance but investors are betting the odds the pipeline doesn’t restart are high.

“The beginning of a ‘maintenance period’, which is stopping the flow of Russian gas to Europe via Nord stream for 10 days, is focusing attention on the risk of a more protracted Russian embargo which could tip in the Euro area into a recession,” says Gilles Moëc, Group Chief Economist at AXA Investment Managers.

The Euro, Pound and other European currencies were all sold amidst ongoing fears of a looming recession linked to gas shortages.

The Dollar was meanwhile further bid as investors reacted to news that districts of Shanghai were undergoing fresh mass testing for Covid which could inevitably lead to tough restrictions being imposed again.

“The dollar is stronger this morning against a basket of currencies due to global growth fears. These have been exacerbated by fears of more lockdowns in China after Shanghai reported its first case of the highly infectious BA.5 omicron sub-variant yesterday,” says Alex Bennet, Co-founder of Smart Currency Business.

Shanghai reported its first case of the BA.5 sub-variant on Sunday and authorities say mass testing for Covid will be performed twice between July 12 and July 14 in nine districts.

“The uncertain outlook is keeping stock markets volatile as worries wax and wane about scorching inflation and a global slowdown while Covid fears rear up again,” says Susannah Streeter, senior investment and markets analyst, Hargreaves Lansdown. “Signs that the Covid horror story is still not quite over are rattling nerves.”

These dynamics reflect an investor environment that tends to favour the Dollar and other currencies that act as ‘safe havens’.

The Dollar index – a measure of broader Dollar performance based on a select USD exchange rates – was near its highest level since 2002 at 107.47. 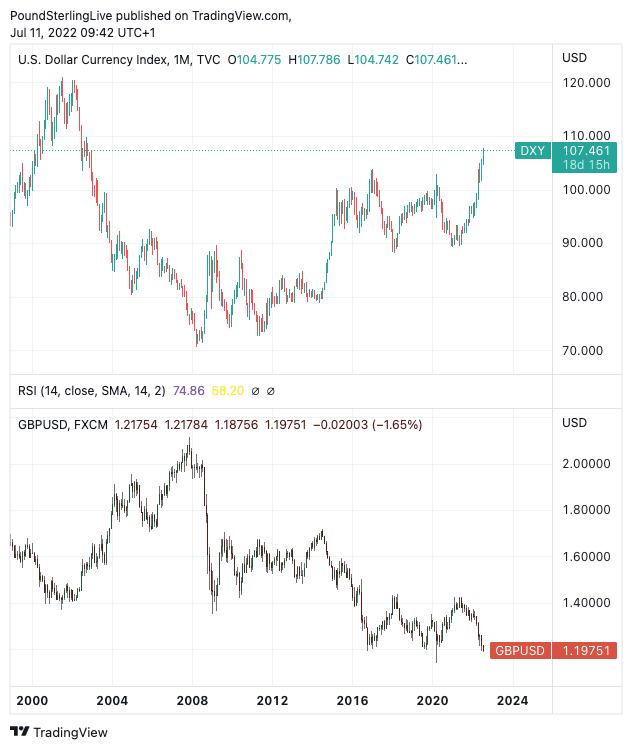 Above: the Dollar index (top) and GBP/USD since the start of the century.

“In the current atmosphere of risk aversion in markets, the US dollar rally is likely to continue in the near term,” says Mark Haefele, Chief Investment Officer, UBS Global Wealth Management.

But looking further ahead the analyst says this strength is unlikely to persist over the longer term.

UBS says in a note out Monday the Dollar’s rally will be constrained by a peak in U.S. Federal Reserve rate hike expectations as investors start to price in a material economic slowdown in 2023.

This could even prompt the Fed to cut rates.

“We advise investors against positioning for a continuation of the US dollar rally. Instead, our preferred safe-haven currency is the Swiss franc. We also favor commodity currencies, which we expect to benefit as commodity prices rebound from the recent dip,” says Haefele.

However the Pound could be on course to test 1.10 by September says currency strategist Jordan Rochester at Nomura, although a fall to parity cannot be entirely ruled out either. (Set your FX rate alert here).

Nomura has held a strategic ‘short’ on the Pound against the Dollar since February, targeting a fall to 1.18.

But this level is fast approaching given the 1.45% fall that has transpired this week alone has already yielded a low of 1.1875, mere pips away from target.

Rochester says several factors explain why the UK currency should underperform its peers, these include the fact that the UK has raised taxes (when others haven’t) and arguably has done less to address the cost of living squeeze.

This results in a consumer consumption crunch.

“Combine this with lower gas flows, a lower EUR, lower risk sentiment and global recession fears — and GBP is likely to fall below our target of 1.18,” says Rochester. (Set your FX rate alert here).

They raise their conviction to 8/10.