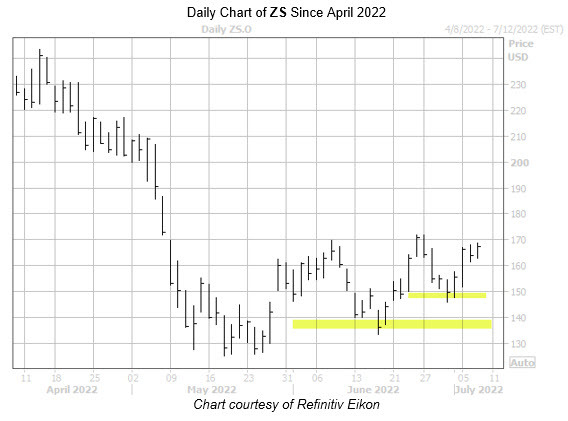 Zscaler Inc. (NASDAQ:ZS) is a high-multiple cloud security name that sold off nearly 70% in its peak-to-trough since November 2021. What’s more, ZS has been steadily growing revenues at an average of 53% year-over-year during the past five years, with the Russian-Ukraine war increasing demand for cybersecurity amid rumored attacks. The cybersecurity software name also extended its relationship with Amazon.com’s (NASDAQ:AMZN) AWS, and announced a new partnership with Siemens. Support may be emerging as well, near the $145-$150 key pivot area.

The cloud security company managed to post an earnings beat recently, despite the current macro environment, and raised its guidance. Zscaler shares also marked a higher low in June, despite the Nasdaq Composite (IXIC) selloff to new lows. Additionally, short interest is up 10.2% in the past month, and now accounts for 7.9% of Zscaler stock’s total available float. This has happened as Zscaler stock rallied – which leaves potential for trapped shorts.

Bryan Sapp, CFA, is a Senior Market Strategist at Schaeffer’s Investment Research, specializing in volatility, short-term equity trading, and macro analysis. Sapp, a more than 15-year veteran of the Schaeffer’s research team, holds a B.S. in economics and an MBA with an entrepreneurship focus from the University of Louisville, and is a CFA Charterholder. Once a highly ranked poker player who amassed over $2 million in tournament winnings, Sapp has translated his skill for strategic plays into monster returns for Schaeffer’s swing trading services.