ExplainSpeaking-Economy is a weekly newsletter by Udit Misra, delivered in your inbox every Monday morning. Click here to subscribe

In a closely fought election, Luiz Inácio “Lula” da Silva has beaten the incumbent far right-wing Jair Bolsonaro to become the next president of Brazil.

The 77-year-old Lula is a former union leader who served as the president of Brazil for two consecutive terms between 2002 and 2010.

Lula’s rule saw Brazil’s economy grow rapidly even as he used government revenues to launch several social welfare programmes such as Bolsa Familia, which was essentially about providing cash to poor families conditional upon their sending their kids to schools and getting them regular health checks.

Despite enjoying almost 90% approval ratings at the time he left office in 2010 — US President Barack Obama once called him the most popular politician on earth — Lula and his handpicked successor in the Workers’ Party, Dilma Rousseff, were later embroiled in corruption cases. In time, Rousseff was impeached as president (2016) and Lula was jailed (2018). In 2019, Lula’s conviction was reversed, thus paving the way for him to fight for the top job once again.

Sixty-seven-year-old Bolsonaro, belonging to the Liberal Party, won the presidency in 2018 while most of the left-wing leaders were discredited and the economy was reeling under the adverse impacts of the 2014 crash in the prices of commodities (such as agricultural produce as well as crude oil) via reduced exports.

As far as candidates go, Lula and Bolsonaro could not have been more different. Lula is admired by his supporters for his humble origins and his policies that pulled millions out of poverty. Bolsonaro is a former army captain and champions traditional conservative and religious views. One of Bolsonaro’s key successes has been to reduce the burden of pensions by raising the retirement age. However, he is also accused of overseeing the largest destruction of the Amazon rainforests in recent years; Lula has promised to end the illegal cutting of the Amazon trees. Another critical factor that might have determined Bolsonaro’s fortunes is the impact of Covid; Brazil had one of the highest Covid deaths in the world.

Here are some of the key challenges facing the new president:

According to the International Monetary Fund (IMF), Brazil was the 12th-largest economy in the world with a gross domestic product of $1.89 trillion (in current prices). Brazil is just below Italy and Iran and just above Korea and Australia.

As seen from Charts 1 and 2 on GDP and GDP per capita (both in constant $ terms), Brazil’s economy had seen a rapid improvement during Lula’s tenure between 2002 and 2010. However, on both counts, Brazil has been heading in the wrong direction since then. Of course, there are several other factors involved apart from the political leadership but this remains the central challenge for the new president. 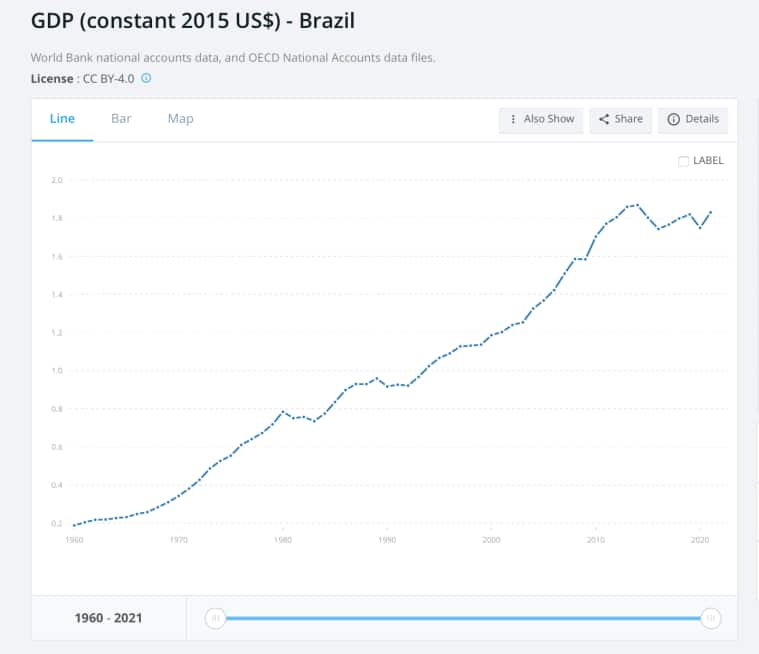 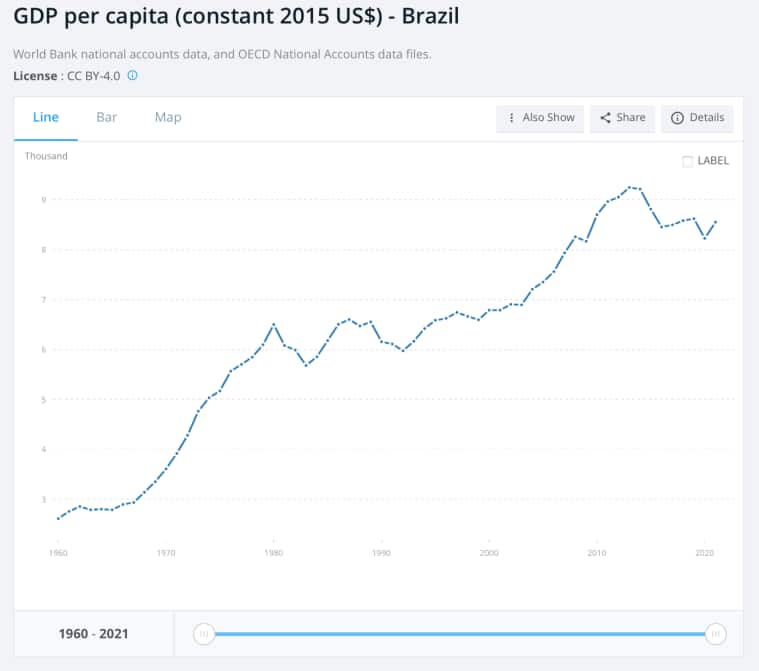 Chart 3 on the GDP growth rate shows how Brazil has lost the growth momentum it enjoyed during Lula’s previous terms. 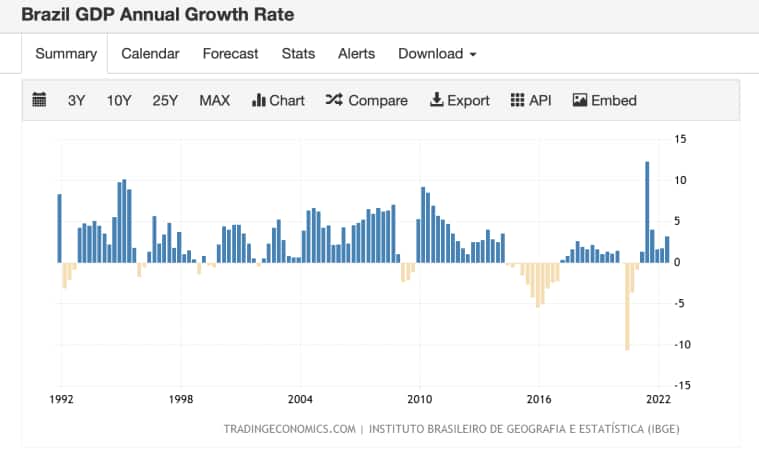 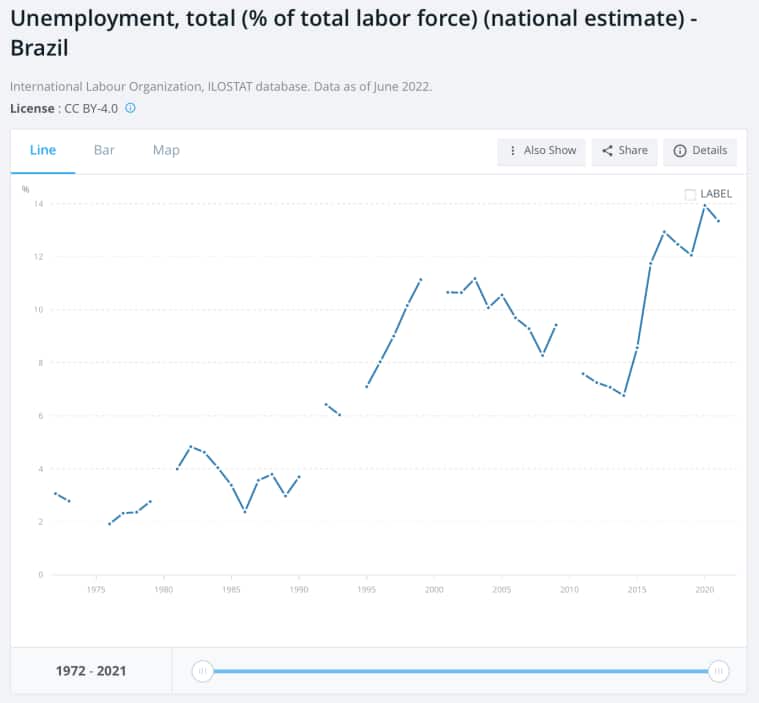 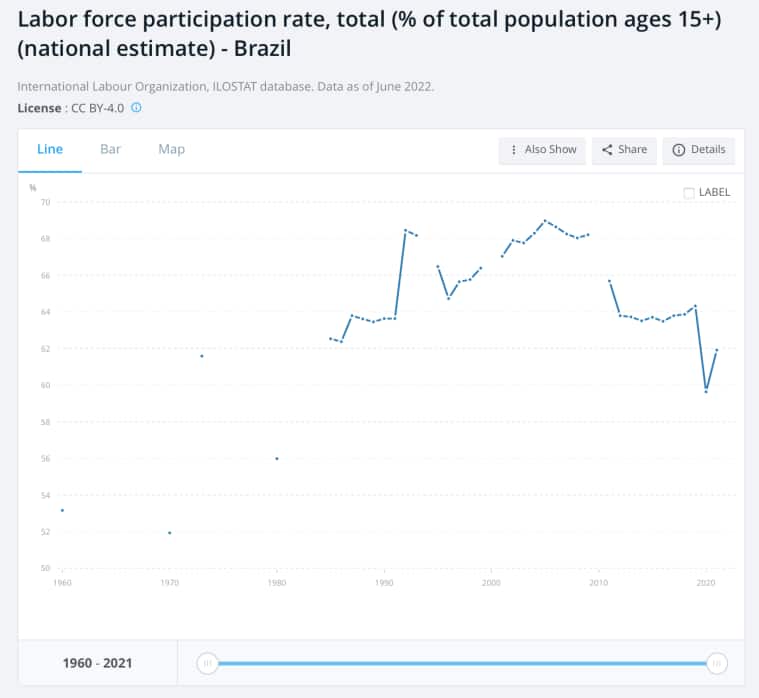 That is why the employment-to-population ratio (that is, the total number of employed people divided by the total population) has been falling (CHART 6). Again, during Lula’s past tenure, the employment rate had gone up. Chart 7 shows how Lula brought down inflation from a high of over 14% to under 4%. However, inflation has been rising in the recent past, staying in the double-digit range for most of 2022. 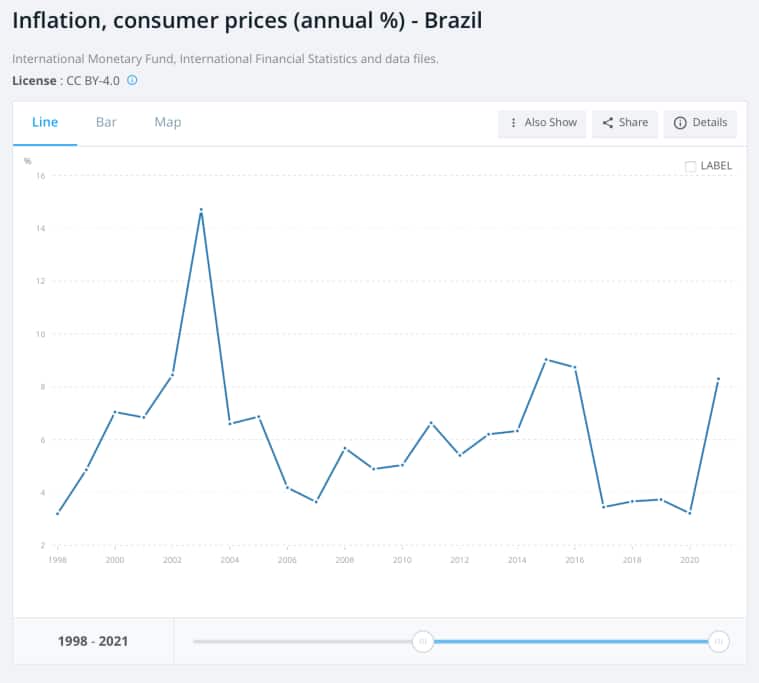 When Lula left, government debt to GDP was below 52% (CHART 8). But it has been rising sharply since. Higher debt to GDP reduces the government’s ability to use its revenues towards either building productive assets or helping the less fortunate. 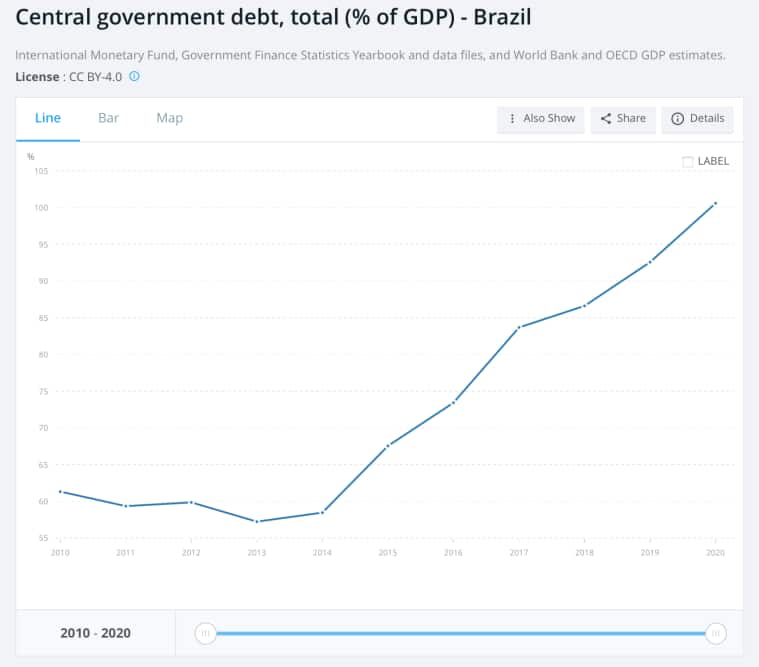 “Polarisation in Brazil has become a major risk not only to the country’s democracy but also to its capacity to address its most urgent policy challenges,” according to a 2021 report by Carnegie Endowment for International Peace.

Brazil, which is the seventh-largest population in the world, has become increasingly polarised since Lula was in office last.

The key turning point occurred in 2013. “Massive protests across all major cities in 2013…Sparked by anger over economic issues such as bus and subway fare raises, the protests soon galvanised a broader anger over inadequate social services and then, over the next few years, systemic corruption across the political class including the ruling PT (Partido dos Trabalhadores or Workers’ Party). The PT succeeded in winning reelection in 2014 after an extraordinarily acrimonious contest that involve such systematic use of such vitriolic fake news campaigns and attacks that a post election return to normal was impossible,” states the Carnegie report.

As president, Bolsonaro has behaved in a manner that further worsened the differences between Brazilians. His unscientific approach towards Covid, his use of conspiracy theories and his “highly confrontational rhetoric—attacking mainstream politicians, the media, public health professionals” were some examples.

The knife-edge results of the current presidential elections show how deeply divided Brazil is and one of Lula’s first jobs would be to find or even create a common ground. The level of political polarisation and radicalisation does have the capacity to threaten Brazil’s economic potential.

Apart from the political and social challenges of bringing together a radically polarised country, Lula would have to solve for high inflation, high unemployment, low growth and high government debt while still maintaining Brazil’s attractiveness to investors.

In the past, despite being a left-wing leader, Lula was able to do it. Chart 9 tracks the performance of Brazil’s stock market (BOVESPA). The index had gone from under 2000 to well over 6000 between the years 2002 and 2010. By contrast, the stock markets have largely stagnated lately. As such, while Lula is expected to possibly use the public sector more directly and provide relief to the poor, he is unlikely to do it in a manner that scares either the markets and investors — as witnessed in the Liz Truss episode in the UK — or Brazil’s central bank.