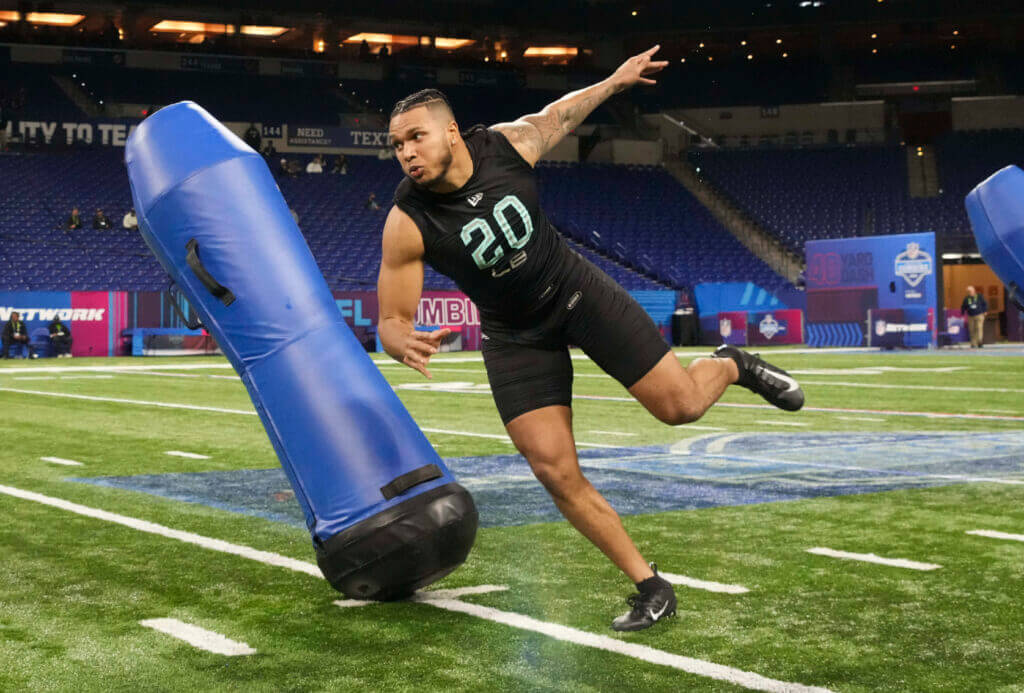 Draft Day has finally arrived, so what better time than now to reveal our final Chiefs mock draft.

With this version, the mission was to acquire a defensive end, cornerback and receiver, prospects who are talented and capable of becoming starters as rookies. But such an objective, I found, required plenty of flexibility to move up or down in the draft, which could likely be the case this week for general manager Brett Veach as well.

Entering the draft, which starts tonight with the first round, the Chiefs have 12 picks, including eight selections in the first four rounds.

Below are my selections, based on the positions the Chiefs want to target, the talent/depth of this year’s draft class and how prospects fit within the team’s schemes. As I’ve done in my previous mocks, teams are enabled to consummate trades. I’ll also reference and utilize the thorough evaluations of prospects from Dane Brugler, The Athletic’s draft guru who published his annual guide — known as “The Beast” — earlier this month.

The tool I used to make my selections is Pro Football Focus’ mock draft simulator, a fun system that factors in each team’s needs while accounting for the randomness that often occurs in a draft. For this mock draft, I adjusted the simulator’s settings to increase the “care for positional value” over “drafting for needs,” and I decreased the “randomness” for the other 31 teams.

Of course I have the Chiefs moving up in the first round. Although the idea of trading up for a receiver, such as Jameson Williams (Alabama), is tantalizing, the Chiefs desperately need to add an impact pass rusher.

In order to select Johnson, I had the Chiefs execute a trade with the Baltimore Ravens. In exchange for the 14th pick, the Chiefs sent the Ravens the 30th pick, the 62nd pick (in the second round) and a 2023 third-round pick. I was comfortable sending the Ravens next year’s third-round pick since the Chiefs will have another pick toward the end of that round, a special compensatory selection as the result of the Chicago Bears hiring Ryan Poles, a minority, as their new general manager. In the simulator, the Ravens selected guard Zion Johnson (Boston College) with the 30th pick.

Johnson was also available because three receivers — Williams, Garrett Wilson (Ohio State) and Drake London (USC) — and quarterback Malik Willis (Liberty) were selected ahead of him.

“Although he can be too segmented and upright in his rush attack, his motor runs hot, and his swipe/rip/stab moves are angry,” Brugler writes. “Overall, Johnson has average get-off, but his length, agility and active hands lead to disruption as both a pass rusher and run defender.”

Johnson has the ideal mix of size and speed coming off the edge, as he recorded 12 sacks, 18 tackles for loss, two pass breakups and two forced fumbles last season. As a rookie, Johnson can learn from veteran pass rusher Frank Clark and be another legitimate threat alongside star defensive tackle Chris Jones. The hope is that Johnson collects close to 10 sacks in the upcoming season.

If trading up in the first is considered a risk, then the selection of Hill is rather safe. Defensive coordinator Steve Spagnuolo loves defenders in his secondary who are known for their versatility. Hill could be the ideal nickel cornerback since he has above-average ball skills. In a pass-happy league, the Chiefs should always welcome another quality defensive back. Hill’s arrival would allow L’Jarius Sneed and Rashad Fenton to play on the perimeter.

“Hill plays with the athletic twitch and transitional quickness to interchangeably play slot-man, deep safety or in the box and can just as easily lay licks in the run game as he can cover the slot fade,” Brugler writes. “He displays the competitive temperament and awareness to smother in zone or man, although he can do a better job exploding through his target as a tackler or blitzer.”

The most fascinating prospect to me in this year’s draft class is Watson. As another run on receivers started to occur early in the second round, I wanted to ensure Watson was selected by the Chiefs. With his size, Watson impressed scouts when he performed well at the Senior Bowl and the scouting combine, where he ran the 40-yard dash in 4.36 seconds.

In this mock, Watson is the eighth receiver selected, which is an outcome that could occur early Friday night. So I had the Chiefs, in another trade up, send the 50th pick, the 135th pick (fourth round) and the 259th pick (seventh round) to the Colts for the 42nd pick. With the 50th pick, the Colts selected quarterback Matt Corral (Mississippi).

Essentially, this is the biggest swing I made in this mock when it comes to high risk and the potential for a high reward. Simply put, I have faith in Watson’s abilities. He could be the perfect prospect for the new version of the Chiefs passing attack, which will feature receivers who have an imposing combination of size and speed. He could be another deep threat if he becomes more polished with his route running. This selection comes with the trust that coach Andy Reid, offensive coordinator Eric Bieniemy and superstar quarterback Patrick Mahomes will develop and accentuate Watson’s skills.

“With his smooth acceleration, Watson displays vertical tempo as a route runner and is quarterback-friendly with the way he works back to the ball and expands his catch radius,” Brugler writes. “He never faced an FBS opponent while at NDSU and will see a sizable jump in speed and physicality when facing NFL competition.”

How about another swing, this time a smaller one with a developmental pass rusher who started his college career as a receiver. In 16 total games at defensive end the past two seasons, Robinson recorded 6.5 sacks and 11 tackles for loss. Robinson has used his skills as a receiver to become an ascending pass rusher that uses speed to get to the quarterback. With the Chiefs, Robinson could be a fun rotational defender who also contributes on special teams as a rookie.

“He has shown noticeable improvement getting his hips, hands and eyes on the same page when rushing the passer, but he relies more on agility and effort than a creative thought-out rush attack,” Brugler wrote. “Overall, Robinson needs to improve vs. the run and develop his countermeasures, but he has exciting pass rush potential thanks to his athletic traits.”

This selection is made in honor of veteran cornerback Charvarius Ward, who, after four successful seasons with the Chiefs, became a free agent for the first time in March and signed a three-year contract with the 49ers.

The prospect who has a projection that is perhaps most similar to Ward in this year’s draft class is Williams. His size and speed are assets that should intrigue the Chiefs. Williams recorded nine pass breakups and three interceptions last season as a press-man cornerback. If he progresses quickly in his career, Williams could be a starter by his second season, similar to the path Ward took with the Chiefs.

“As a former wide receiver, he has ball skills and an instinctive feel for route development, but he is late to find the football once his back is turned, and NFL play-callers will feed on his risk-taking appetite,” Brugler wrote. “Overall, Williams might require a redshirt year as he continues to hone his technique, but his size, sudden footwork and recovery speed are the foundation traits of a future NFL starter.”

The third and final trade of this mock started with the Cincinnati Bengals interested in acquiring the 121st pick. So the Chiefs sent the 121st pick and their seventh-round picks — 233rd, 243rd and 257th — to the Bengals in exchange for the 136th pick, the 174th pick (fifth round) and 209th pick (sixth round). The trade was appealing since the Chiefs can get out of the seventh round and end the draft with eight prospects, a more logical outcome than using all 12 selections. With the 121st pick, the Bengals selected tackle Braxton Jones (Southern Utah).

At 136, the debate in the Chiefs’ draft room was between Allgeier and running back Kyren Williams (Notre Dame). Allgeier was selected because of his production the past two seasons (3,104 all-purpose yards in 24 games) and his ability to gain yards after contact, as 70.9 percent of his yardage last season came after initial contact. He is a nice addition behind starter Clyde Edwards-Helaire and veteran Ronald Jones.

“A decisive ball carrier, Allgeier shows a lot of the ancillary traits necessary to be productive at the next level and competes with the attitude and determination of a former walk-on (see his chase-down forced fumble on 2021 Arizona State tape),” Brugler wrote. “Although he isn’t overly elusive, he runs through arm tackles with his body strength and contact balance.”

The Chiefs could take a tackle in this year’s draft, but the team also needs to add another interior offensive lineman. The decision here is to select Stueber and develop him throughout his rookie season to be a possible quality backup capable of replacing veteran guard Nick Allegretti, who is entering the final year of his rookie contract.

“Stueber is assignment-sound in pass protection with the hands and response time to combat what rushers throw at him,” Brugler wrote. “He is a functional run blocker and creates movement on down blocks, but he has some stiffness in his lower body and must improve his pad level to create movement.”

When healthy, Allen is a reliable pass rusher. Ending this draft class with another defensive end gives the Chiefs another chance to select a prospect who could be a steal, similar to last year with right guard Trey Smith, who was also selected in the sixth round. Before last year’s draft, Brugler had Smith as the 99th-ranked overall prospect. This year, Allen is the 120th-ranked overall prospect.

Allen led the SEC with 13 tackles for loss in 2020, and he recorded six sacks. But he played in only the opener last year before sustaining a season-ending foot injury.

“Allen plays with excellent play strength and hand violence to stay detached from blockers in the run game and as a pass rusher,” Brugler wrote. “He needs to become better schooled with the art of pass rush, but he displays the natural twitch and upfield attack skills worth developing.”

The hope with such a draft class is that Jermaine Johnson and Hill are productive starters, perhaps star defenders, with the Chiefs for the majority of their career. The other six prospects selected — Watson, Robinson, Williams, Allgeier, Stueber and Allen — are bigger gambles, calculated risks where the Chiefs’ roster can become even stronger if just two or three of those players become major contributors.

Pro Football Focus agrees with the selection of Johnson and Hill, but the best-evaluated decision was selecting Allen with the 209th pick, which produced an A grade. When evaluating my three trades and the eight prospects I selected, Pro Football Focus said such a draft class was worthy of a C overall grade. With trades and a big-swing selection in the second round, two outcomes are likely possible: a memorable draft class or an underwhelming one. Either way, the Chiefs, in my opinion, should be bold.