Welcome to Forex Friday, a weekly report in which we discuss selected currency themes mainly from a macro viewpoint, but we also throw in a pinch of technical analysis here and there.

In this week’s edition, we discuss (1) the latest Eurozone data and how this is impacting the EUR/USD; (2) the drop in bond yields and why this is important for FX and precious metals, and (2) provide a preview for the main macro events coming up in the week ahead.

Eurozone GDP surprises, but so too does CPI…again

The EUR/USD and other euro crosses continued to underperform foreign currencies following the release mixed Eurozone data, although they were showing some signs of life at the time of writing just before midday in London. Growth data from the Eurozone – boosted by Spain, Italy and France – beat expectations, which undoubtedly helped to lift sentiment in the stock markets. However, the stronger GDP data didn’t fool FX traders. End of Q2 is already two months old, and recent economic indicators suggest growth has weakened at the start of Q3. What’s more, there is no sign of inflation turning lower, for it has accelerated to a fresh record high in the Eurozone. This means that consumers are facing even more pressure on their disposable incomes, which should translate into lower spending and thus weaker economic activity. Indeed, there could be more inflation in Germany once government subsidies expire at the end of August. The ECB might have to now deliver another 50-basis point hike.

So, stagflation fears remain alive which is why the euro struggled to find much love despite both GDP and inflation coming in hotter than expected. But much of the downside risks are already priced in for the euro, I would imagine. So, I still think there is more juice left in this EUR/USD recovery – especially in light of the sharp drop in US bond yields as a result of weakness in US GDP and Powell hinting that the pace of rate increases will slow down.

As before, I continue to expect the EUR/USD will climb further over the next few days, and re-test the old broken support zone around 1.0350. We need to see a breakout above 1.0250 first, and soon. There is also the potential for a rally beyond this level to 1.05 handle, but we will cross the bridge when we get there. One step at a time.

Overall, I only expect to see moderate further upside for the EUR/USD exchange rate.

This short-term bullish technical outlook will become invalid if key support at 1.0120 breaks on a daily closing basis.

Yields drop: Forget about hattrick of 75bp hikes from Fed

If you are confused as to why the Japanese yen has performed so well this week, then look no further than this chart of benchmark 10-year government bond yields: While yields in the rest of the world have fallen, Japanese yields already under pressure because of the BoJ’s ongoing intervention, fell only modestly.

Yields have been dropping sine the middle of June and this week saw that trend accelerate after the first estimate of the second quarter GDP confirmed the US was in a recession. Although the dollar fell against some currencies, most notably the yen, it held its own relatively well against the euro and pound, although I reckon it is only a matter of time before these currencies also find some buying interest – as per above discussion.

The US GDP data has re-affirmed my view that the Fed will have to slow down the pace of the hikes and potentially go in reverse in early 2023. After all, that is what the Fed chair had implied the day before. Powell indicated at the FOMC press conference on Wednesday that the pace of interest rates hikes will slow, and that future hikes will depend on incoming data. “While another unusually large increase could be appropriate at our next meeting, that is a decision that will depend on the data,” Powell said.

Well, GDP was quite poor, so there won’t be a hattrick of 75 basis point hikes in September, that’s for sure.

Against this backdrop, gold and silver should be able to find buyers on the dips, given how much they have fallen already this year. This week has been a wonderful one, especially for silver after it managed to break out from that long-term support area we have been highlighting: 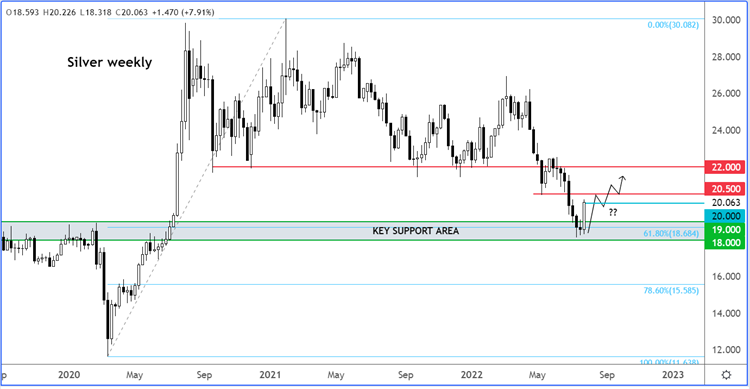 Keep a close eye on US macro data that will be released throughout next week, as investors try to figure out the Fed’s next move. But in terms of the most important macro events, these are the three to watch:

Traders abandoned bets on a 75-basis point rate hike from the Reserve Bank of Australia after headline inflation came in slightly slower than expected at +6.1% rather than 6.3% expected. It looks like another 50bp rate hike is now on the agenda, but this is priced in already.

Bank of England’s “steady as she goes” approach to interest rate hikes (25 basis points) has been heavily criticized as inflation in the UK has surged to new 40-year high of 9.4%, causing the past weakness for the pound. Will it finally join the rest of central banks with a bigger hike of 50 basis points this time? There is the possibility that the GBP/USD could rise to 1.25 handle.

US jobs reports have not been having the same impact on the markets because the focus has been on inflation and the economy. But if we start to see weakness in employment again, then this will further worry investors about the health of the world’s largest economy.

How to trade with FOREX.com

Follow these easy steps to start trading with FOREX.com today: