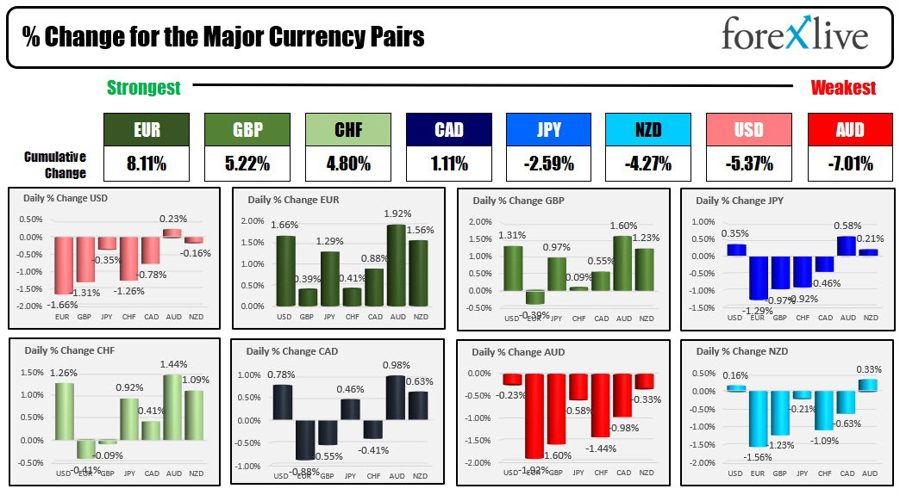 All the market balls are in motion.

Looking at the forex market, the USD was the 2nd weakest of the major currencies, only outsold by the AUD. The RBA only rose rates by 25 basis points (vs 50 expected) when they announced their rate decision in the Asian session yesterday. That kept a lid on that currency in trading today with solid declines vs the EUR, GBP and CHF. Will the RBNZ start a pattern by restricting their hike today? The expectations are for 50 BPS.

Meanwhile the EUR and the GBP, two currencies which have been hit hard in 2022, are the strongest. The EURUSD traded at its lowest level on the year on Wednesday last week at 0.9535. The price traded to parity today (well 0.9999).

Helping the shift is a few things:

On Friday the important jobs report in the US will be released. If it shows some ebbing of the growth that will help to fuel the moves.

Does the gains in bond prices (lower yields) and the stock market hurt the Fed’s inflation fighting hopes.

TIme will tell, but helping is the destruction the recent declines accomplished.

The US rate moves helped to push the US 30 year mortgage rate to over 7%. That is probably a bit too high. I don’t think the Fed wants to absolutely destroy the housing market, but if rates on mortgages were to go back to above and below 6%, it could live with that.

The US stocks fell below their 200 week MAs this week and changed the mindset of the traders in the process. Investors are likely less exposed and may have also shifted to a more balanced – less speculative – bond and equity portfolio. Moreover, the harsh reality of the declines, and the Fed hawkish talk – has likely taken some of the expectations that the Fed will ALWAYS come to the rescue. In addition, multiple and earnings are not expected to be all that great as the impact of higher inflation works it way through the economy. That combination will likely put a lid on gains. Having said that there is still room to roam to the upside – but just don’t expect a return to the highs for a long time.

On the fiscal front, the fiscal stimulus from UK Truss administration was met with disdain and disgust. That market reaction will perhaps put a limit on the global fiscal measures going forward. The days of printing money from a fiscal perspective may be over as well.

As a result, the economies and businesses within the economy need to stand on their two feet and not rely on the money printing machines. For traders, there could be some two way price action as well as buyers shift to sellers and then back to buyers when levels are reached.

For today though, the balls are all in the air and they favored the dollar selling, stock and commodity buying and lower yields.