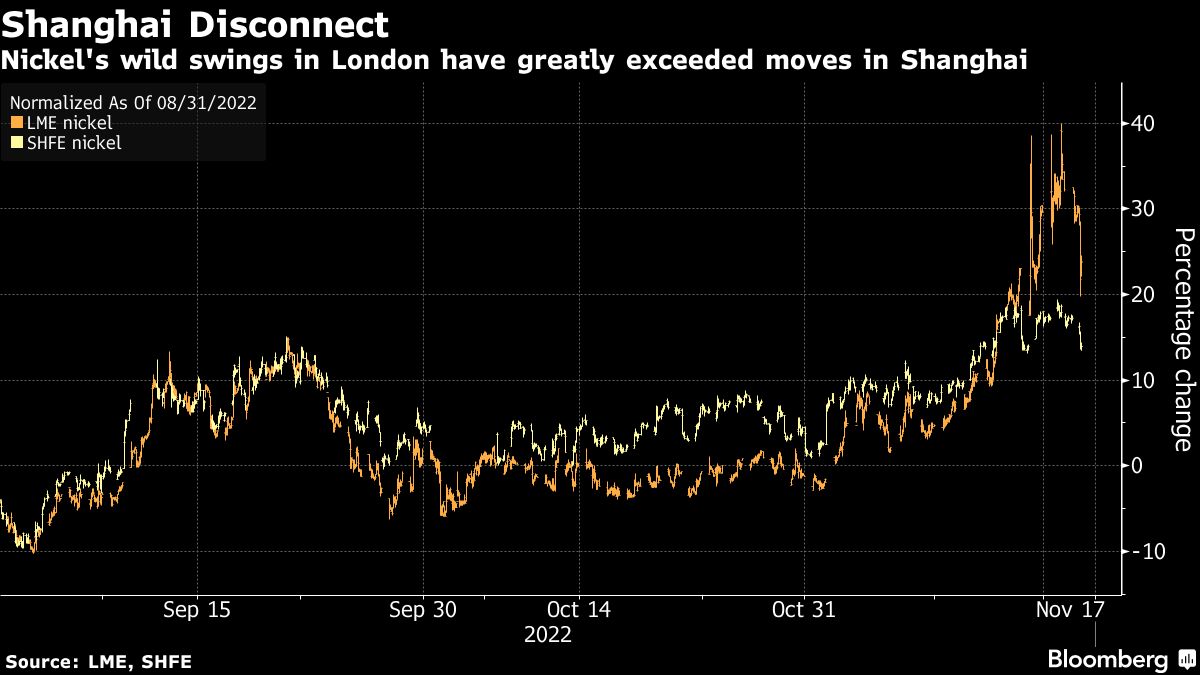 (Bloomberg) — The London Metal Exchange is stepping up surveillance of trading in the nickel market after sharp price swings revived memories of the extreme volatility seen during a runaway short squeeze.

Most Read from Bloomberg

The move comes after nickel prices fell rapidly Wednesday afternoon, unraveling dramatically after supply fears sparked erratic rallies in thin trading conditions earlier in the week. It’s the most extreme bout of volatility since a historic price spike in March, and it’s heightening concerns that plunging liquidity in the wake of the controversial squeeze risks wreaking fresh havoc.

The exchange also is undertaking enhanced monitoring to ensure that participants’ trading activities are being conducted appropriately, a spokeswoman for the bourse said by email. The LME also said in a notice to members that the initial margin required to trade nickel will be raised to $6,100 per ton after Friday’s market close, a 28% increase over current levels.

The LME has implemented controls to limit the size of intraday price swings since March, when prices rose 250% over two days as brokers raced to close out bearish bets held by top producer Tsingshan Holding Group Co. and other clients.

Still, the day-to-day volatility of the London nickel contract has increased sharply, and the extreme moves this week have been far greater than those seen on the rival Shanghai Futures Exchange, where liquidity is now far deeper.

Prices on the two bourses have historically traded in lockstep, but the relationship broke down in dramatic fashion this week, raising concerns about the efficacy of the LME contract as a global benchmark for producers, consumers, physical traders and investors.

“The diabolical behavior we saw in the market earlier this year has obviously scared a lot of people off,” Ole Hansen, head of commodity strategy at Saxo Bank A/S, said by phone. “It’s become a disorderly market. It’s not a market many people want to touch and so it becomes very easy to push it in either direction.”

All metals moved lower toward the close of trading Wednesday, with tin erasing an earlier gain of more than 5%. The soldering metal has rebounded rapidly from a two-year low, with mounting concerns about supply and growing optimism about the outlook for the Chinese economy shoring up sentiment.

Most Read from Bloomberg Businessweek