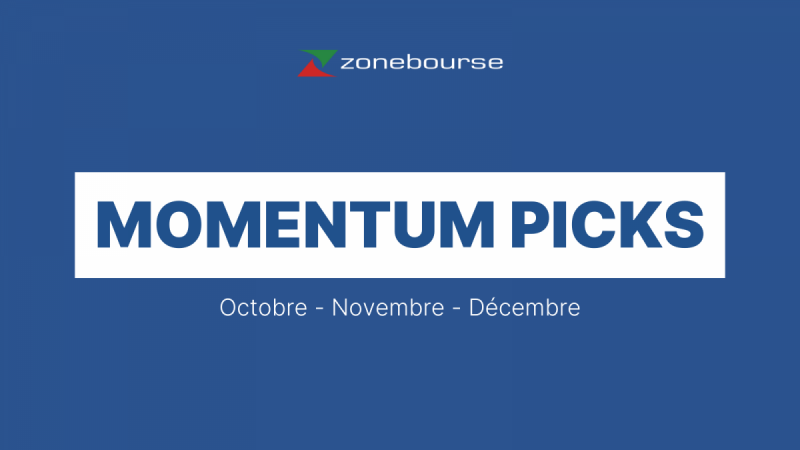 Here’s a little selection for stock-pickers in swing trading, as well as tactical investors who want to take advantage of a move in stocks over the medium term (from a few weeks to a few months). Here’s our top 5 US stocks for the fourth quarter of 2022 (beginning of October to end of December). Quality stocks with good fundamentals supported by a positive momentum.

In the classic sense of the term, momentum is an investment vision that favors stocks that have been trending positively over the past six and twelve months. At MarketScreener, momentum certainly includes data on a positive trend of the stock in the short, medium and long term, but above all, analysts’ revisions of earnings and sales in the very short term (7 days), medium term (4 months) and long term (12 months), weighted by the visibility of the analysts’ business model and the divergence of their estimates, on the assumption that analysts are rather conservative in their revisions.

In our previous selection, we chose United Health Group, Merck & Co, AutoNation, T-Mobile and Raytheon Technologies at the end of June 2022. A portfolio weighted on these five positions would have generated a return of -4.7% compared to -4% for our benchmark, the S&P 500 index, over the third quarter (from 07/04/2022 to 09/29/2022). The performance is in line with the benchmark with less than 1% difference, so nothing exceptional. However, this performance was achieved with less volatility than the S&P 500.

The Momentum Picks selection has maintained a +8.3% lead over our benchmark (S&P 500) since the beginning of the year (this outperformance was mainly achieved in Q2 2022).

Let’s take a closer look at the five U.S. stocks selected for Q4 2022 (October to December).

Our “momentum” selection for the next three months: 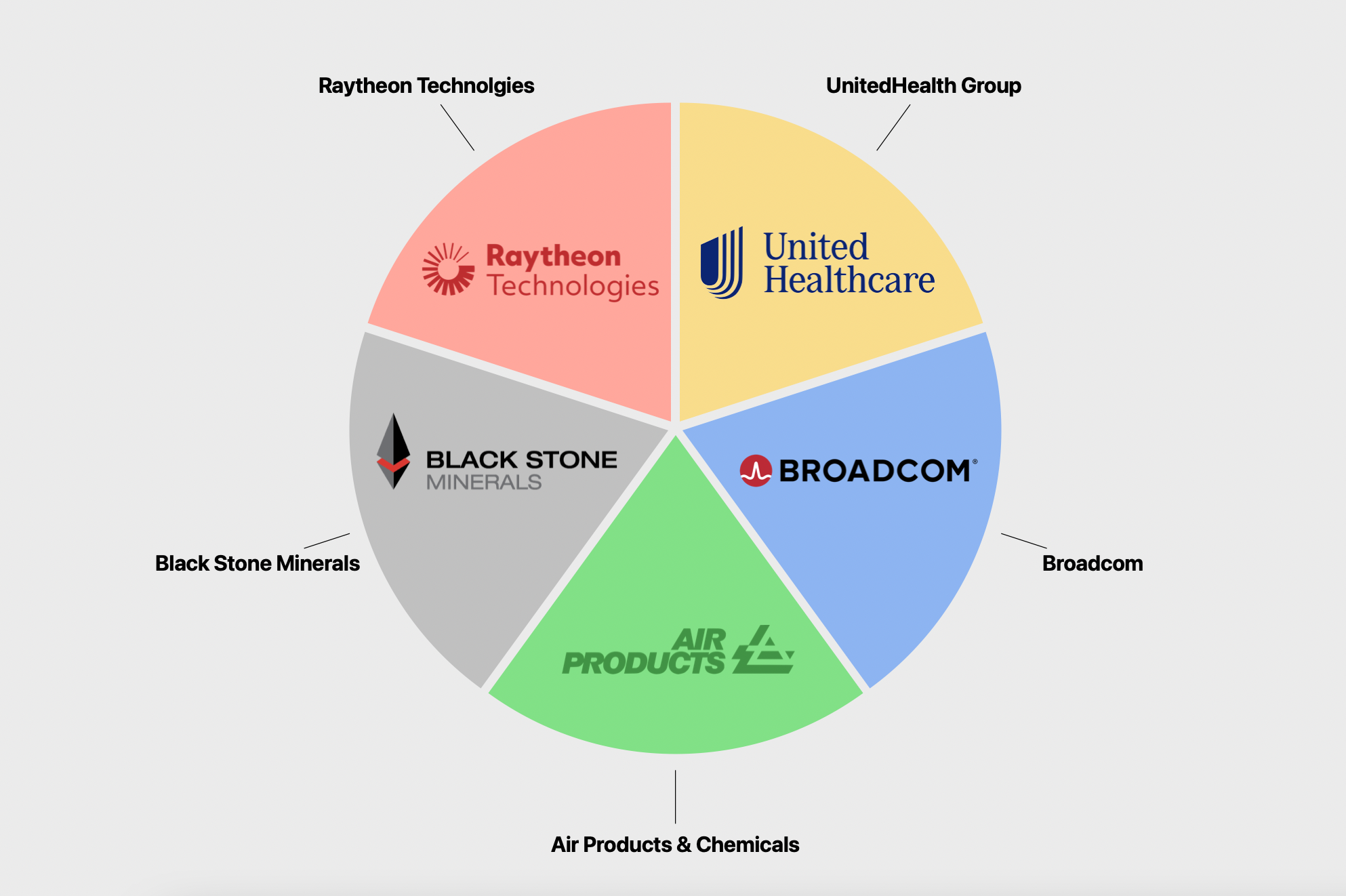 Black Stone Minerals owns and manages oil and natural gas mining interests in the United States. The company’s core business is to maximize the value of its existing mineral and royalty assets through active management and to expand its asset base through the acquisition of additional mineral and royalty interests. The Company has mineral interests in approximately 16.8 million gross acres.

It also has non-participating royalty interests (NPRI) on approximately 1.8 million gross acres and overriding royalty interests (ORRI) on 1.7 million gross acres. Its mineral and royalty interests are located in approximately 41 states in the continental United States, including all onshore producing basins. Many of these interests are inactive resource plays, including the Haynesville/Bossier shale in East Texas/West Louisiana, the Wolfcamp/Spraberry/Bone Spring in the Permian Basin, the Bakken/Three Forks in the Williston Basin, and the Eagle Ford shale in South Texas.

The group is benefiting from the geopolitical tensions over oil and gas. Its earnings forecasts have been sharply revised upwards over the past year. Black Stone Minerals is one of the best ways for investors to take advantage of bullish fundamental conditions in the energy market. Its low operational risk and balance sheet quality, coupled with a still-favorable outlook, make it a favorite stock in the energy sector.

UnitedHealth Group was already present in the previous Q3 selection (Q3 2022), and the stock is again included. The company is a leading U.S. provider of healthcare products and services. Revenues are split between health insurance (59.3% of sales), managed care services (37.5%) and IT services (3.2%). The stock of the largest U.S. health insurer has had an incredible run on the stock market over the past ten years, with the stock rising 25% per year since 2012 (including dividends). This feat has been achieved by a nice increase in margins and revenues coupled with a well-controlled acquisition policy.

The group has a leadership position in this market. The company is in line with the US government’s desire to reduce healthcare costs for the general public. However, United has strong pricing power. History has shown that health care is the sector that offers the most recurring results even during major financial crises (2000 and 2008) and during inflationary peaks. A resilient sector, therefore, that declines less during crises and also outperforms in bull markets.

Broadcom, which was born as Avago in 2005 and whose parent company changed its name to Broadcom after its acquisition in 2016, is one of the biggest players in semiconductors. It ranks fifth in revenue behind TSMC, Intel, SK Hynix and Qualcomm and third in market capitalization behind TSMC and Nvidia.

The company was formed in 2005 when Agilent ‘s semiconductor division was sold to private equity firms KKR and Silver Lake Partners. Shortly thereafter, in early 2006, Hock Tan was named CEO. The company went public in 2009, and at the time, its size and scope were much smaller than they are today. To tell you the truth, Broadcom ‘s market capitalization has grown from a $6.5 billion midcap in 2009 to $200 billion today.

It benefits from economies of scale and barriers to entry, which are industry-specific but not unique. Semiconductor manufacturing typically requires high levels of fixed costs and leverage is primarily realized on the gross margin line. While most semiconductor companies have adopted the “fabless” model (outsourcing production to foundries such as TSMC, Samsung, Global Foundries and others), Broadcom operates both a fabless model and also has a few foundries of its own.

The company pays a hefty dividend for the sector, estimated at $16.40 this year. Dividend growth has been on a nice upward trend over the past six years (CAGR of 43%).

The technology sector usually suffers in this type of uncertain inflationary environment accompanied by a sharp rise in interest rates. However, it would be rude to confuse the napkins with the towels. Indeed, players with balance sheets that include high ratios of intangible assets, such as Broadcom, are doing quite well in the face of these policy changes. Its cost control through the holding of many tangible and intangible assets protects it from inflation, more than other players in the sector. In addition, the company has announced a solid outlook for 2022 and has better than industry average visibility on its backlog.

Air Products & Chemicals (AP&C) is a world leader in the production and distribution of industrial gases, and a direct competitor of the French company Air Liquide and the German company Linde, among others. However, AP&C has a very particular profile.

The big bet on hydrogen (a hot topic but the subject of many specialist debates) and on the Persian Gulf region, with a mega-project in Saudi Arabia and, earlier, the purchase of Air Liquide’s activities in the Emirates. AP&C generates one third of its sales in North America, one quarter in Europe and the Middle East, and nearly one third in Asia, with the balance in the rest of the world.

The company benefits from unbreakable barriers to entry thanks to its non-reproducible asset base and hyper-dense and complex integrated supply chains. It is a low-volatility stock with good visibility (despite rising gas prices and energy market tensions), and the company’s revenue growth outlook has recently been revised upward.

Already included in the previous selection, Raytheon is the world’s largest capitalization in the defense and aerospace sector. It is not a pure-player as the company generates 27.4% of its turnover in air navigation systems through its subsidiary Collins Aerospatial, 27% in aeronautics through Pratt & Whitney, and 27% in aeronautics through its sister company Collins Aerospace.27% in aeronautics via Pratt & Whitney, which manufactures civil and military aircraft engines, and 23.1% in missiles and integrated air defense systems. In particular, they manufacture the Stinger anti-aircraft missile, and with Lockheed Martin they co-produce the Javelin anti-tank missile, two of the most formidable weapons that the West is sending to Ukraine.

The defense sector is just beginning to revise upwards (analysts are adjusting their sales and earnings per share revisions) and the trend is likely to continue according to our estimates. The war in Ukraine has changed the security situation. Most European countries are not meeting the initial target of 2% of GDP spent on defense. This readjustment to 2% alone would lead to a 25% increase in the global defense budget. The whole sector should therefore benefit greatly from these favorable policies.

We will report on the evolution of these five stocks at the end of the year.