What is Technical Analysis?

Some of the most popular indicators include:

There is a wide range of technical indicators, all of which show fluctuating values based on calculations of historical prices. Technical analysts believe that future price movements can be partially predicted by past price movements. A great deal of academic research supports this concerning momentum or trend in major liquid speculative markets.

What is Fundamental Analysis?

Fundamental analysis examines the economic and political environment concerning an asset and attempts to use this to judge whether the asset is over or under valued. Investors in the stock market will mostly be very familiar with this fundamental style of analysis. In Forex, a fundamental analysis of the US Dollar would look at macroeconomic data such as US GDP and inflation rates, as well as the monetary policy of the US central bank, the Federal Reserve, especially its decisions on interest rates. Most of these data points are marked on freely available economic calendars and may be accessed via major financial sites.

Fundamental analysis is typically most indicative of a major price change when it unexpectedly reverses a trend. For example, imagine an economy where inflation and interest rates are low. Then new inflation data is released which unexpectedly shows an increase in inflation, which is then repeated at the next release, suddenly making it likely that the central bank will raise its interest rate to try to suppress the rising inflation. This can be a fundamental trigger for the rise in the relative value of the economy’s currency. It is important to remember that fundamental analysis can be challenging because of the often-complex interplay between changes in economic data and monetary policy. You might think that rising inflation should logically lower the value of a currency, but it tends to have the opposite effect if it is seen as more likely to push a central bank towards hiking its interest rate.

What is Quantitative Analysis?

Quantitative analysis is a technique which uses mathematics to produce statistical analysis to reduce an outlook to a numerical value. It may be applied to either fundamental or technical analysis. For example, a quantitative analysis of historic price data may assign a value of 1 to an asset whose price has risen by at least 10% over the past month, a value of 2 if the rise was between 5% and 10%, etc. and make trading or investment decisions based on these gradations. A quantitative analysis of fundamental data might assign a value of 1 to an economy whose inflation rate is above 8%, a value of 2 if between 5% and 8%, etc. The analyst would then buy or sell an asset depending upon the overall values derived from these indicators.

When to Use Fundamental vs Technical Analysis?

Technical analysis is a more reliable method than fundamental analysis for forecasting future price movements, at least when applied to trend / momentum. Correctly anticipating changes in central bank policies may be more powerful but is extremely hard to execute. For example, anyone with minimal chart-reading experience can look at a price chart and tell whether the price has gone up over the past six months, and whether it has done so strongly or weakly. Getting a good handle on the interplay between economic data points and central bank policies as data over or undershoots is much more complicated. Unfortunately, many beginner traders are taught that mastering fundamental analysis is important, but the only simple relationship between price and fundamental data is in interest rates, and that has historically been less predictive in Forex than price momentum in major currencies such as the US Dollar or the Euro.

There are an infinite number of technical analysis approaches and combinations one can use to trade and beginning with a good foundation of technical tools helps each trader to find their personal trading style. My style of technical analysis incorporates an amalgamation of price action and one or two momentum indicators at most applied to higher time frames in the major Forex currency pairs, but each trader will find what best suits the, after a period of research and practical experimentation. My use of technical analysis first and fundamental analysis second is just one way to use the two methods. There is no ‘one size fits all’ or fixed rules around what to use when, but it is important to understand the purpose and assumptions behind methods you wish to employ.

How to Learn Fundamental Analysis?

The best way to learn how to use fundamental analysis in Forex is as follows:

As I said earlier, technical analysis is much simpler and easier to learn than fundamental analysis, which is often more of an art than a science. The key thing to watch for, is a surprise, especially when central banks are forced to suddenly change approach. These can trigger the start of major trend changes, giving you the confidence to follow technical indicators in the same direction and to try to hold on for the long term. When done successfully, this can bring big profits.

How to Trade with Technical and Fundamental Analysis

Below are some examples of all three possible solo or combination approaches showing how to trade with either technical or fundamental analysis methods or a combination of both.

The price chart below shows a modest yet effective technical analysis setup using trendlines, an SMA, and the RSI. Joining highs and lows using standout trendlines is a great way of gauging the overall trend of the market as well as possible reversals (marked in blue). 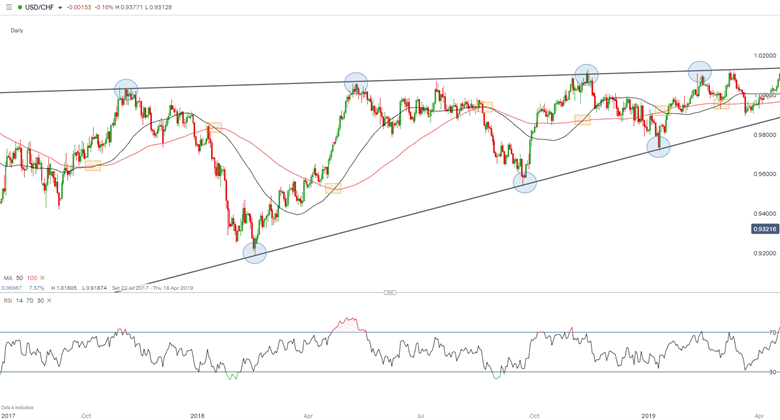 The RSI is used to indicate any extreme bias in the market and is marked by the green and red areas on the RSI, respectively. Finally, I have included two SMAs (50 and 100). The SMA is a multipurpose indicator that can help evaluate or support trend direction – if prices are above the SMAs, a bullish bias is favored, and vice versa. Furthermore, moving average crossovers (marked in yellow) can be indicative of an upcoming upside or downside move – bullish when the shorter-term SMA (red) crosses above the longer-term SMA (black) with the same logic being applied the other way. Key psychological levels and areas of confluence play an important role in trader psychology, this has been eliminated from this example but should not be overlooked in real world application.

A major fundamental driver of Forex rates is the interest rate differential between two currencies. The monthly NZD/USD chart below shows that when the Reserve Bank of New Zealand began easing its monetary policy in April 2015, while the US Federal Reserve began increasing rates shortly after, indicated the beginning of a downwards price movement in the NZD/USD currency pair. 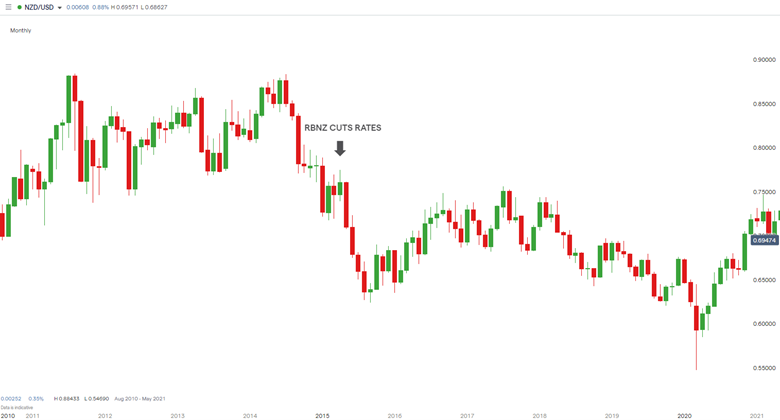 The result was a depreciation of the NZD against the USD as the attractiveness of a higher interest rate pulled investors into US assets, increasing the demand for USD. This simple example of interest rate dynamics shows the influence of economic theory on the Forex market and how following interest rate differentials can help traders gain an edge.

My final example shows how a trader can utilize both technical and fundamental analysis at the same time. This is a more complex scenario but getting the timing of a trade right both fundamentally and technically has proven to be highly effective in my experience. The weekly Dollar Index (DXY) price chart below involves price action, trendlines, candlestick patterns, indicators, and fundamental knowledge. 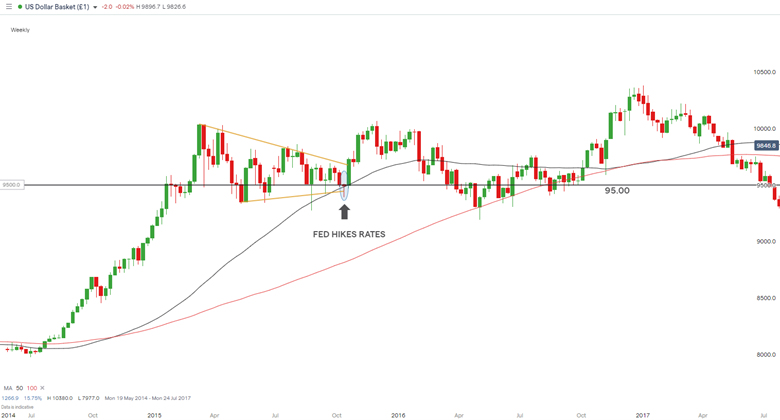 During the period leading up to the Fed rate hike labeled on the chart, markets had some inclination of a coming rate hike by following prior statements made by Fed officials and money market pricing – most of this information can be accessed via major financial media outlets and trading websites free of charge.

The weekly candlestick at the time of the Fed’s announcement hovered around the key 95.00 psychological round number along with the bull pennant’s (marked in yellow) lower support line and the 50-day SMA. These technical indicators were beginning to hint at a forthcoming bullish price movement. From this point, a trader could wait for the weekly candlestick to close (shaded in blue) which provided an additional bullish signal by the lower long wick of the candlestick.

My trading experience tells me that the greater the number of factors/signs in favor of a particular direction, the better the chances of a successful trade. Should the trade move against the intended direction, using price action data such as swing lows and highs can help with placing suitable stop losses to minimize risk and maximize the potential reward to risk ratio, which is very important for overall trading profitability.

Advantages and Disadvantages of Fundamental vs Technical Analysis

Some feel that technical analysis has been discredited, or at least has a bad name. This is because too many traders go crazy using indicators and get overly concerned with which indicators and settings they use. Simple methods of determining the direction and strength of momentum on multiple time frames are likely to be all the technical analysis you need, maybe in addition to a good method of determining likely support and resistance levels.

The most effective elements of fundamental analysis in trading Forex are central bank monetary policies, especially interest rates, and inflation. As the Forex market is driven mainly by the US Dollar which accounts for something like 80% of Forex globally, FOMC meetings are usually the most important fundamental event in the Forex calendar to watch.

What is the difference between technical and fundamental analysis?