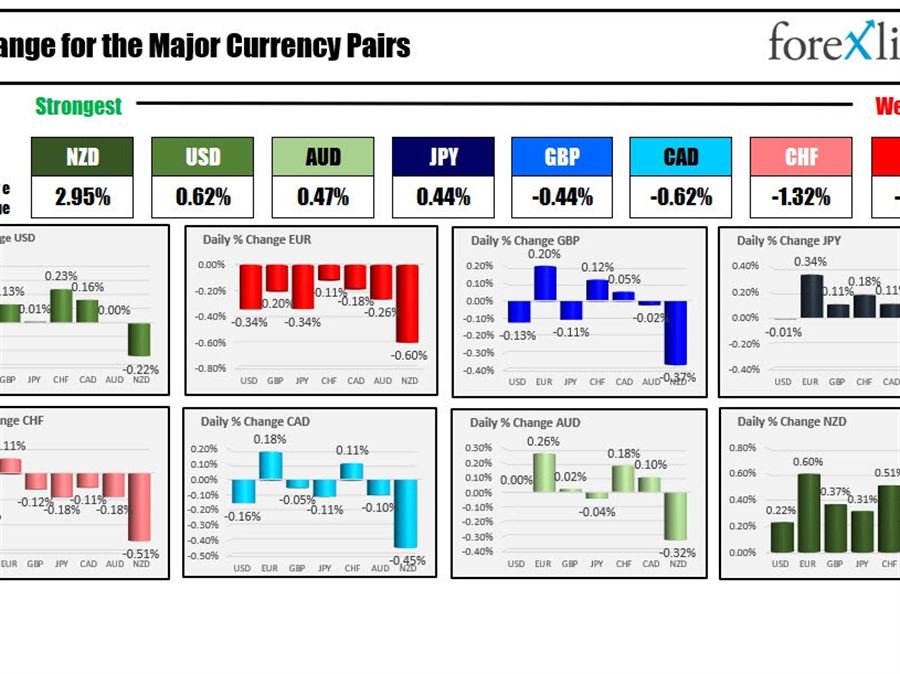 As the North American session begins the NZD is the strongest of the major currencies while the EUR is the weakest. The EURUSD has moved down after three days of gains saw the currency pair move up toward the 50% midpoint of the trading range since the June 27 peak up at 1.06144. The low price reached last week (July 14) reached 0.99515. The midpoint is at 1.02829. The high price today of 1.0272 got within 10 pips of that midpoint level, before starting a move to the downside seen over the last 4-5 hours of trading. The ECB is expected to raise rates by 25 basis points at their meeting tomorrow, but there was a chatter that a 50 basis point hike may be considered. Italy survived a political crisis as it appears prime minister Draghi has reconsidered quitting although there is coalition concerns that remain to be repaired/saved. The Italian benchmark 10 year yields are down around -9 basis points after trading as much as -14 basis points lower on the day.

The USD is modestly stronger today after 3 days of declines. Existing home sales will be released at 10 AM ET (accounts for 80% of US home sales). Yesterday has a source are lower than expected but building permits were better-than-expected.

US stocks futures are pointing to a modestly lower opening after strong gains seen in yesterday. Netflix reported earnings yesterday and although subscribers declined by about a million, that was less than the 2 million expected. There stock is trading higher (+6.5%) in premarket trading.

Also on the calendar today is crude oil inventory data will be released with the expectations of 1.357 build. The private data yesterday showed a build of 1.860M for crude and 1.290 for gas.

A look around the markets shows:

The US stock futures are implying a modestly lower open for the major indices after solid gains yesterday:

In the European equity markets, the major indices are mostly lower:

In the US debt market, yields are lower across the board with the 2 – 10 year spread modestly higher but still negative them at -20 basis points (vs. -21.2 basis points at the close yesterday).

In the European debt market, the benchmark 10 year yields are also down ahead of the ECB decision tomorrow.