The Nifty closed lower for the third consecutive week on April 29 but the losses were marginal. It was another week of consolidation for the index, which has been moving in the 16,800-17,400 range.

“With the last two weeks of rangebound movement, the daily time frame chart exhibits a ‘Triangle’ pattern and prices are inching closer to their apex point. A breakout in either direction is imminent,” Sameet Chavan, Chief Analyst-Technical and Derivatives at Angel One said.

He expects the index to head north, where 17,400–17,450 are the levels to watch out for. “The moment the level is crossed, a lot of individual stocks will likely participate in the next leg of the rally.”

This view, however, would be negated if the index slides and sustains below the lower range, said Chavan.

Here are the top 10 trading ideas by experts for the next three-four weeks. Returns are based on April 29 closing prices:

The stock has been finding support at its 200-day exponential moving average (EMA) for the last six months. Last week, the stock broke out from the narrow range with a jump in volumes. It has surpassed the crucial resistance of the previous swing high of Rs 244.

The stock witnessed running correction in the week gone by but considering the primary uptrend, the scrip can be accumulated. 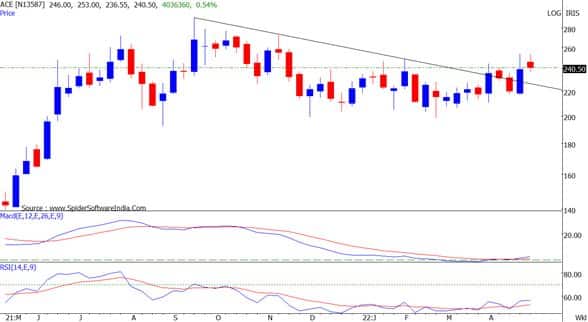 The stock has corrected more than 10 percent from the recent swing high of Rs 730. It has reached the crucial support of the upward sloping trend line, adjoining the previous swing lows on the daily charts.

Higher tops and higher bottoms on the weekly chart are well intact and the stock is placed above its long-term moving averages. The recent fall in the price can be used to accumulate the stock. 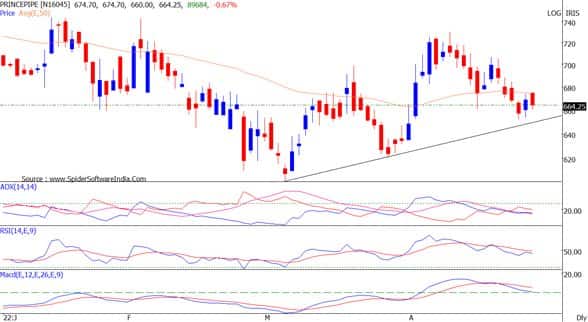 In the week ended April 22, the stock broke out from the downward sloping trend line, adjoining weekly swing highs. The stock witnessed a running correction of 6 percent in the previous week with lower volumes. On the weekly charts, MACD has crossed its signal line on the upside and also reached above the equilibrium line. Gas sector stocks have underperformed the broader market recently and have not shown any significant up moves. The ‘Lower Top Lower Bottom’ structure continues in this stock and the recent pullback has resisted around the 38.2 percent retracement of the previous correction.

In terms of the Elliott Wave Structure, it seems that prices have completed the ‘wave iv’ of an impulsive down move and should now see the next leg of correction to complete the fifth wave.

Hence, traders can look to sell IGL Futures in the range of Rs 350-355 for a potential target of Rs 315 in the next few weeks. The stoploss for short positions can be at above Rs 370. After a price correction, the stock saw a pullback move in March and then consolidated in a range in the last month. This consolidation has taken place above its “200 EMA” support and now the prices are on the verge of a breakout from falling trendline resistance.

The volume has increased in the last couple of sessions and the ‘RSI Smoothened’ oscillator, too, is indicating positive momentum. 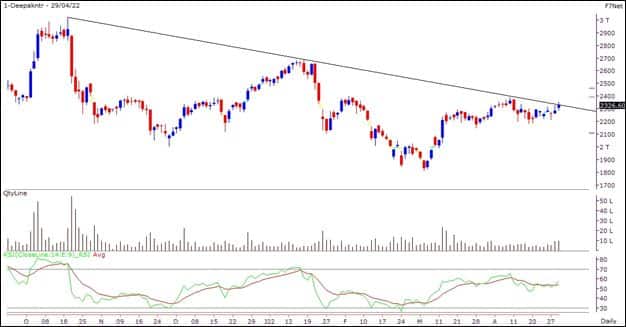 In the week ended April 8, the stock saw a breakout from the Pennant pattern and recorded a new high of Rs 724.80.

Key technical indicators are also positively poised. This could lead the stock towards Rs 774 initially and Rs 895 subsequently. On the lower side, the stock will find support at around Rs 560.

The stock remained sideways after retracing 50 percent of the prior up-move (Rs 276.35-1,148.05). Its weekly RSI reversed from the oversold zone and gave buy signal.

Historically, the stock witnessed an exponential rise after an identical buy signal. Its weekly MACD oscillated around its lowest level and is on the verge of a bullish crossover.

History may repeat itself. The stock may rebound utilising prior consolidation. On the higher side, it will face hurdles at around Rs 800 and Rs 850. A stable move above these hurdles can take the stock to Rs 940-990-1,040. In case of a decline, support can be found between Rs 700 and Rs 690.

We’re seeing noticeable traction in FMCG counters and Tata Consumer is also trading in sync with the trend. It has formed a strong base after hovering within Rs 790-825 levels for two weeks and witnessed a breakout from the same.

UPL has been trading with a positive bias and inching closer to its record high. It has taken a pause of late while holding firm above the support zone of short-term moving average (20 EMA) on the daily chart.

Indications are in the favour of a steady rise. We recommend accumulating in the Rs 820-830 range.

ONGC has formed a distribution pattern after retesting record highs in early March and is now trading on the verge of a breakdown from the same.

It has also slipped below the crucial support zone of the medium-term moving average (100 EMA), further adding to the pressure. We advise creating shorts in the range of Rs 162-164 levels. Download your money calendar for 2022-23 here and keep your dates with your moneybox, investments, taxes