US stocks eked out a marginal advance after a volatile trading day on Tuesday, as investors attempted to navigate an increasingly complex outlook for monetary policy and the global economy.

The broad S&P 500 gauge, which closed 3.2 per cent lower on Monday, swung between gains and losses but was 0.2 per cent higher by late afternoon.

The technology-focused Nasdaq Composite, which fell more than 4 per cent the previous session, gained 1 per cent. Europe’s regional Stoxx 600 added 0.7 per cent — tracing back some of the previous day’s 2.9 per cent decline.

Global equities had on Monday posted their worst day since June 2020. Tuesday’s swings reflected the tension between investors keen to buy the market dip and rising caution over the outlook.

The Federal Reserve last week raised its interest rate by half a percentage point for the first time since 2000, while the UK, Australia and India also lifted borrowing costs.

“The broad context for markets is not great,” said Salman Baig, portfolio manager at Unigestion, referring to the Fed tightening monetary policy, persistently high global inflation, Russia’s invasion of Ukraine and an economic slowdown in China driven by its zero-Covid policies.

Baig added that in equity markets, he would expect “the troughs to continue to be deeper and the peaks to be lower, and that we are basically trending down”.

In debt markets, the yield on the 10-year US Treasury note fell 0.05 percentage points to 2.99 per cent as fixed-income investors topped up on the low-risk asset to reflect fears of a recession. Bond yields fall as their prices rise.

In a speech on Tuesday, New York Fed president John Williams said the US central bank’s “challenge” was “to bring inflation down while maintaining a strong economy”. 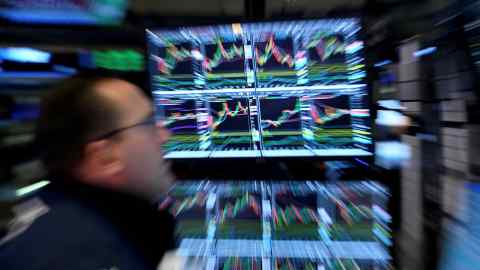 “There’s really no good outcome in the near term,” he said. “If central banks are too dovish, inflation gets out of control, but if they focus on inflation and raise interest rates, which is one of the few tools they have, that will have a big impact on growth.”

US inflation data due on Wednesday is expected to show that consumer prices rose 8.1 per cent year on year in April, following an 8.5 per cent increase in March.

The Vix index — a measure of expected volatility known as Wall Street’s “fear gauge” — dipped slightly from 34.75 to 33.08 but remained well above its long-term average of 20, signalling expectations of further stock market swings to come.

The Nasdaq has closed more than 2 per cent higher or lower on 12 trading days over the past month.