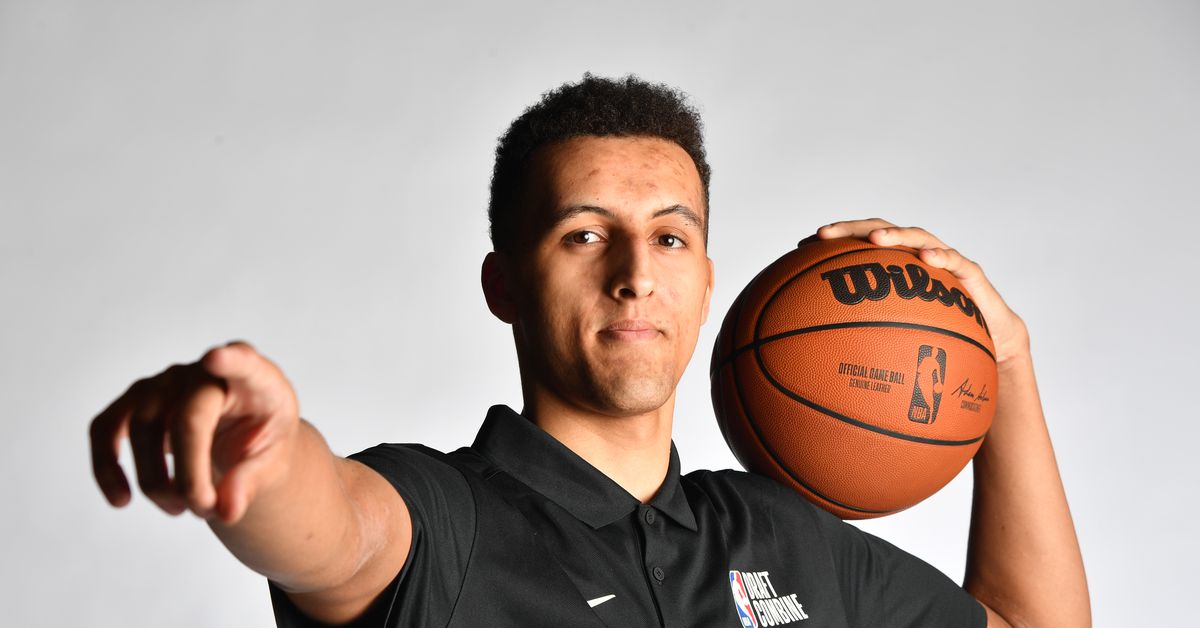 So much for the Golden State Warriors trading out of the 2022 NBA Draft to save money. With trades swirling all around them at the end of the first round, the Warriors kept their No. 28 pick and took a big swing on University of Wisconsin-Milwaukee forward Patrick Baldwin Jr. Baldwin, aka “PBJ,” was a former top prospect whose stock fell after a disastrous freshman year in college and a lackluster combine, but the Warriors decided to bet on his potential. In the second round, rather than selling or trading their picks, they actually moved up to nab another mid-major player, Toledo point guard Ryan Rollins, and then drafted a Brazilian forward, Gui Santos, who’s unlikely to come to the NBA this year.

It was a volatile NBA Draft, with the New York Knicks trading out of the lottery for future picks and cap space, Oklahoma City grabbing three lottery picks and two players with the same name (Jalen and Jaylin Williams, no relation), and Memphis indulged owner Robert Pera’s fetish for eating dead salary by taking on Warriors enemy Danny Green and his $10 million to get a pick. Plus, the expected No. 1 pick changed, as the Orlando Magic took Duke’s Paolo Banchero instead of Auburn’s Jabari Smith, Jr. at the top spot – Smith went to Houston instead.

Oklahoma City was perhaps the most active team, trading the No. 30 pick to the Denver Nuggets before the draft, with experts predicting they thought three first-round picks was too many. But after taking Chet Holmgren second, they traded three 2023 picks to the Knicks to move up to No. 11 and take Ousmane Dieng, and then their first Jalen Williams (from Santa Clara) at No. 12. Combined, Holmgren and Dieng are 13 feet-ten-inches tall and weigh just 400 pounds, continuing the Thunder’s quest to prove that an all-scarecrow-sized front court can win an NBA title. However, I do believe that drafting two men named Jalen Williams and Jaylin Williams in the same draft should be illegal and the Thunder should be forced to forfeit a pick for even trying it.

The Sacramento Kings were a small surprise taking Iowa’s Keegan Murray at No. 4, but he fits the Kings’ history of taking older players in the lottery (Murray will be 22 when the season starts), and acquiring scoring college forwards who don’t pass (see: Derrick Williams, Marvin Bagley, Thomas Robinson). That meant Purdue’s Jaden Ivey dropped to the Detroit Pistons, who then acquired center Jalen Duren (the No. 13 pick) in a three-way deal with Charlotte and the New York Knicks. The deal was complicated, with the Knicks ultimately sending out the No. 11 pick, four second-round picks, and Kemba Walker’s $9 million contract for three future first-rounders, while routing Duren to Detroit and an additional first-rounder to Charlotte. Basically, the Knicks and Hornets chose future conditional choices and salary cap savings over this year’s late lottery picks.

Arizona’s Bennedict Mathurin went to the Indiana Pacers at No. 6. With Malcom Brogdon on the trading block, the Pacers could set an NBA record for most letters in a starting backcourt if they pair Mathurin with Tyrese Haliburton (33, which even beats a Sarunas Marciulionis-Mitch Richmond combo). The Portland Trail Blazers took a flyer on Kentucky-sort-of guard Shaedon Sharpe, who practiced with Kentucky last year but didn’t play in a single game, so his tape is basically 12 (very impressive!) AAU games in high school and a lot of YouTube mixes of sweet dunks.

The New Orleans Pelicans used yet another Lakers pick from the Anthony Davis trade to pick Australian point guard Dyson Daniels, from G League Ignite, and San Antonio picked Baylor’s Jeremy Sochan, in part because he’s such a versatile defender, and in part because Gregg Popvich is required to draft at least one international player in every draft. Sochan has a Polish mother and grew up in England, so that’s good enough to comply. Later, San Antonio added two teenage guards who lit it up in college last season, Malaki Branham of Ohio State and Notre Dame’s Blake Wesley, so they’ve covered their bases on both sides of the ball, no matter what happens with Dejounte Murray.

After that, more trades! Memphis traded Nos. 22 and 29 to get Wake Forest’s sweet-passing forward Jake LaRavia, a guy whose stock dropped because one website incorrectly listed his age at 22 and thousands of people ran with it – he’s only 20. His skills are very similar to free agent Kyle Anderson, so it seems like a Slow Mo return is a No Go. The Grizzlies weren’t done, sending out backup guard (and Warriors killer) De’Anthony Melton and taking back Danny Green’s big salary to get Colorado State’s extremely beefy wing (6’5”, 260 pounds) David Roddy at No. 23. Later, they traded a future Lakers second-rounder to get Tennessee’s Kennedy Chandler. All three of these draftees are already furious at Andre Iguodala and convinced Jordan Poole destroyed Ja Morant’s knee, so they’ll fit into Grizzlies culture perfectly. Memphis loves trading up and they love trading down and they did both last night.

The trades kept coming. Minnesota traded with Houston to get Wendell Moore with Dallas’ old pick, and Houston got Kentucky’s TyTy Washington instead. Minnesota also added giant shot-blocking Caucasian Walker Kessler, whose name sounds like either a long-tenured senator from Arkansas or an award-winning gothic novelist. The Nuggets took Christian Braun from Kansas and took a flyer on the highly-touted and infrequently-played Peyton Watson from UCLA. Denver loves high pedigree players who fall in the draft for whatever reason – Michael Porter Jr., R.J. Hampton, Bones Hyland – and Watson fits this mold perfectly. Milwaukee picked a tearful MarJon Beauchamp, Miami took the confusingly-named Nikola Jovic, and then the Warriors nabbed Baldwin.

Baldwin had a rough year, and a poor combine – a 26-inch vertical jump is bad at a blogger combine, though Baldwin claims he didn’t know he could jump off both feet. But his “disappointing” freshman season only consisted of 11 games, as he missed most of the season re-aggravating an injury from high school – he dislocated his ankle in the second game of his senior year. Then he rushed back at Milwaukee, where his dad was the head coach, and on thin ice. The Warriors love a coach’s kid or a player’s kid – that describes Steph Curry, Klay Thompson, Andrew Wiggins, and Jordan Poole, while Draymond Green’s aunt was a college star. And we personally love a coach’s son who no longer has to play for his dad anymore – all the basketball IQ, no more of the weird family dynamics making things, you know, weird.

Speaking of Draymond, Baldwin is a big fan. and he said this months ago, not just sucking up after he knew he was a Warrior.

“One of my inspirations, leadership wise, is Draymond Green. I know people don’t say that too often. With his leadership style, I don’t think people understand that in order to be that type of vocal leader, you have to be that guy who brings it every single night.”

At No. 28, you’re unlikely to get a player who helps immediately anyway, so while Baldwin probably can’t defend at an NBA level anytime soon, the Warriors do seem to have a strong development program, and they love a big man who can shoot from outside. Baldwin’s percentages weren’t great last year, but just look at this gorgeous jump shot.

He may not play in San Francisco much next year, but the fans in Santa Cruz are in for a treat.

Next the Warriors sent Atlanta cash ($2 million!) and the No. 51 pick to get Ryan Rollins at No. 44. Rollins was a first team All-MAC selection as a sophomore, though he’s still only 19. He was 4th in the conference in both scoring and steals, and while his three-point percentages weren’t amazing, he shot 80% from the free throw line, which is actually a better indicator of future three-point proficiency for college players than three-point percentage. ESPN’s Jay Bilas called him a sleeper pick, said he was a “mid-range marksman,” complimented his ability to score in a pick-and-roll, and declared, “I love this pick!”

Bob Myers agreed, saying that Rollins was by far the highest player on their board. “At the end of the day, we saw a talent. And we didn’t think he’d be there at No. 51.” Myers said, acknowledging that a 19-year-old backup guard wasn’t exactly a pressing need. “Thankfully, Joe agreed and said you can spend the $2 million and go get him. That was the logic behind it.”

Look, in all the talk about the Warriors potentially moving their picks, much of it from me, it’s exciting that the taxpaying Lacob is still down to spend on a second-rounder when his basketball people want him to. Winning teams buy picks, losing teams sell picks. In a related story, the Sacramento Kings selected another guy expected to go in the top ten a year ago, Jaden Hardy, and traded him for second-round picks in 2024 and 2026.

The final pick was Gui Santos, and I’m not going to pretend I know anything about him except that he’s Brazilian, and thus by definition more fun than a non-Brazilian player. If nothing else, Santos can hang out with Leandro Barbosa at summer league. There were two things about Santos the Dubs clearly liked. One, both his parents were professional basketball players in Brazil. Two, he isn’t going to come to the NBA this season, so they’ll save a roster spot and a salary. He only turned 20 the night before the draft, so even though he’s raw, there’s a chance he puts it together and develops an outside shot to go with his excellent rebounding. But he’ll be putting it together for Minas in the Brazilian league.