The difference between success and failure in Forex / CFD trading is highly likely to depend mostly upon which assets you choose to trade each week and in which direction, and not on the exact methods you might use to determine trade entries and exits.

So, when starting the week, it is a good idea to look at the big picture of what is developing in the market as a whole, and how such developments and affected by macro fundamentals, technical factors, and market sentiment. There are very strong trends in the market right now, which can be easy to exploit profitably. Read on to get my weekly analysis below.

I wrote in my previous piece on 18th September that the best trades for the week were likely to be:

The news is dominated by last week’s 0.75% rate hike and more hawkish outlook from the US Federal Reserve, which produced a dramatic further strengthening of risk-off sentiment and saw a strong flow into the US Dollar from almost all other currencies, as well as from stock and commodity markets. The Fed made it clear that it intends to hike rates by another 1.25% over the remainder of 2022 to reach an anticipated rate of 4.4%. The US 2-Year Treasury Yield rose strongly from the 3.90% area to a new multi-year above 4.20%, while the US Dollar Index also made a similar long-term weekly high closing price. Stock markets fell strongly, with the key S&P 500 Index ending the week 4.84% lower while almost all other major global indices also fell, notably the Chinese HSI which reached a new 11-year low price.

Beyond the Fed, there were important events involving other major central banks, which made last week a very big week in the Forex market. The Bank of Japan intervened overtly in the currency market for the first time since 1998 to prop up a rapidly declining Yen, while the Bank of England and the Swiss National Bank both hiked their interest rates. The British government announced a surprise slew of tax cuts, which are to be financed by a new tranche of £72 billion in government borrowing, in a dash to improve the UK’s sluggish GDP growth. Markets did not like the plan, greeting it with a dramatic sell-off in the Pound.

Selloffs were also seen in the commodities sector, with almost every commodity ending the week lower. Gold was a notable standout as it closed below $1650 at a near 2.5-year low, while WTI Crude Oil also fell firmly to trade below $80 for the first time since January. The major Forex movements over the week were in flows from the British Pound, the Euro, and the New Zealand Dollar into the US Dollar, with the GBP/USD currency pair declining very rapidly to reach a new 37-year low price at $1.0850.

The details of the important economic data releases last week can be summarised as follows:

The Forex market saw relative strength in the US Dollar and Swiss Franc last week. The weakest currencies were the GBP, the NZD, and the Euro.

The coming week in the markets is likely to see considerably less volatility than last week, with very few major data releases due compared to the previous week. Releases due are, in order of likely importance:

It is a public holiday this Friday 30th September in Canada.

The weekly price chart below shows the U.S. Dollar Index printed a massive bullish candlestick which closed up right on its high, in line with the long-term trend, which is bullish. This was the Dollar’s strongest weekly performance since March 2020.

The weekly closing price was the highest seen in many years, which is a bullish sign. The price is trading well into blue sky. The Dollar is sweeping away almost everything, including every major currency except of the Swiss Franc. The Japanese Yen also regained some ground against the Dollar after the Bank of Japan began to intervene to prop up its currency.

These are all very bullish signs. The only note of caution for bulls is that more central banks might intervene like the Bank of Japan, but it is hard to see the ECB or the Bank of England doing so successfully, so the Dollar is very likely to rise still further against these two currencies at least. It also seems the Dollar ended the week again rising against the Yen.

We have a new support level formed at a recent weekly low near 108.00, which adds to the bullish case.

It remains a good idea to look for long trades in the US Dollar over the coming week. This is a very powerful, long-term bullish trend in the most important currency in the Forex market. 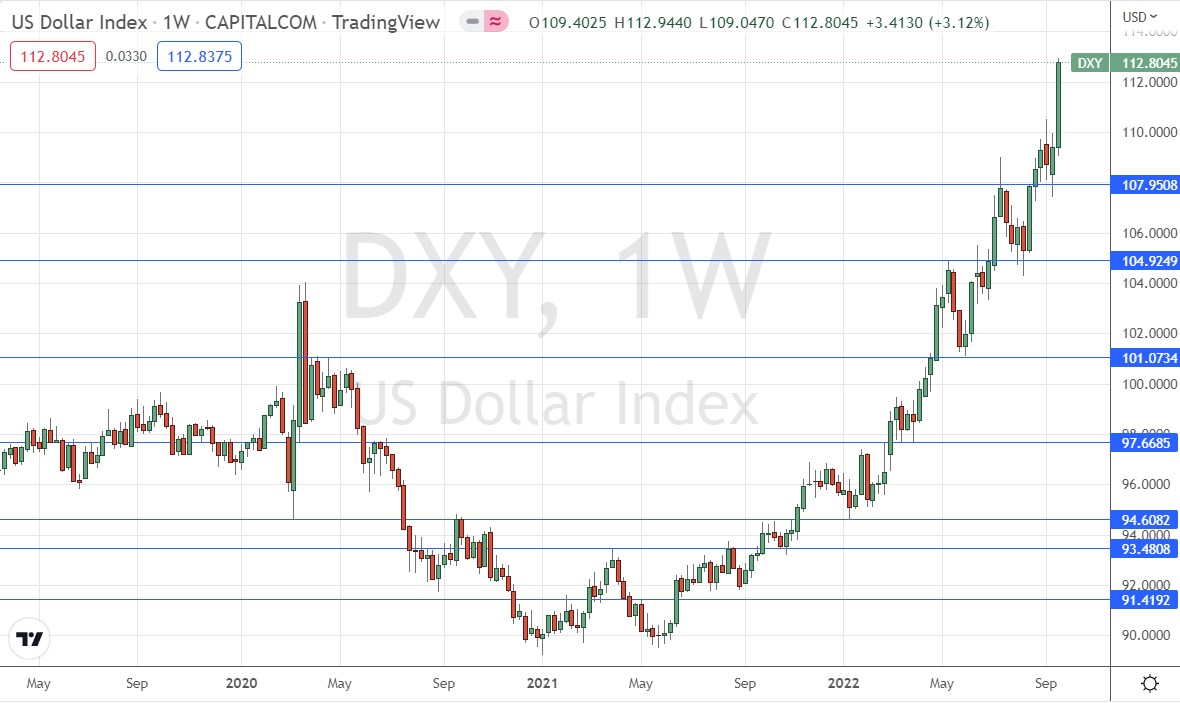 I do not like trading Gold short, because historically it does not trend downwards in a smooth and predictable way. However, Gold is strongly positively correlated with the US stock market, and we see stocks and other commodities all moving down as risk-off sentiment sends strong money flows into the US Dollar. There is no haven from inflation in the market right now, and the solution for investors seems to be speculating that the US Dollar will continue to strengthen, despite its high rate of inflation. 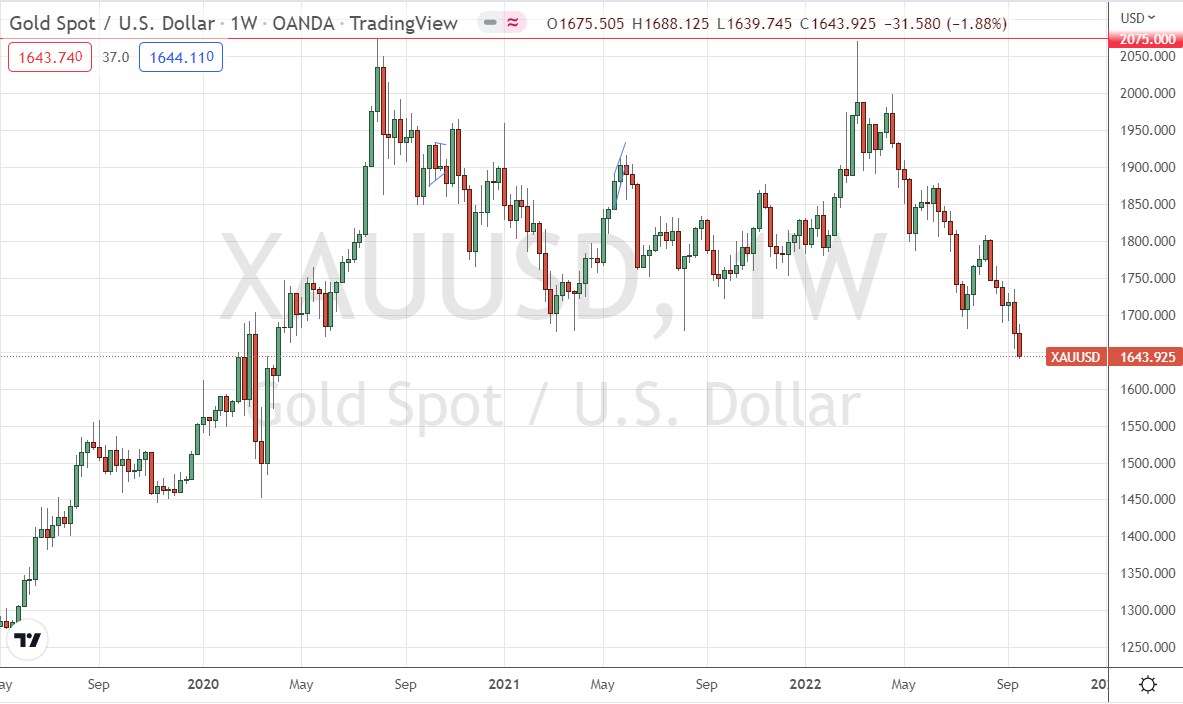 The NASDAQ 100 tech index fell strongly last week, printing a bearish candlestick, as all major global stock indices had a very bad week. Global stocks have taken a serious beating due to the persistently high inflation data we are seeing in the US and the consequential hawkish tilts the Federal Reserve is constantly making as their expectations are continuously proven again and again to be somewhat over-optimistic.

It is notable that both this Index and the major S&P 500 Index are now very close to making new 2-year low prices.

I do not like to trade stocks short, as they are prone to sudden and strong bullish reversals, but there may be continuing opportunities here on the short side if we continue to see strong bearish momentum as markets open on Monday. 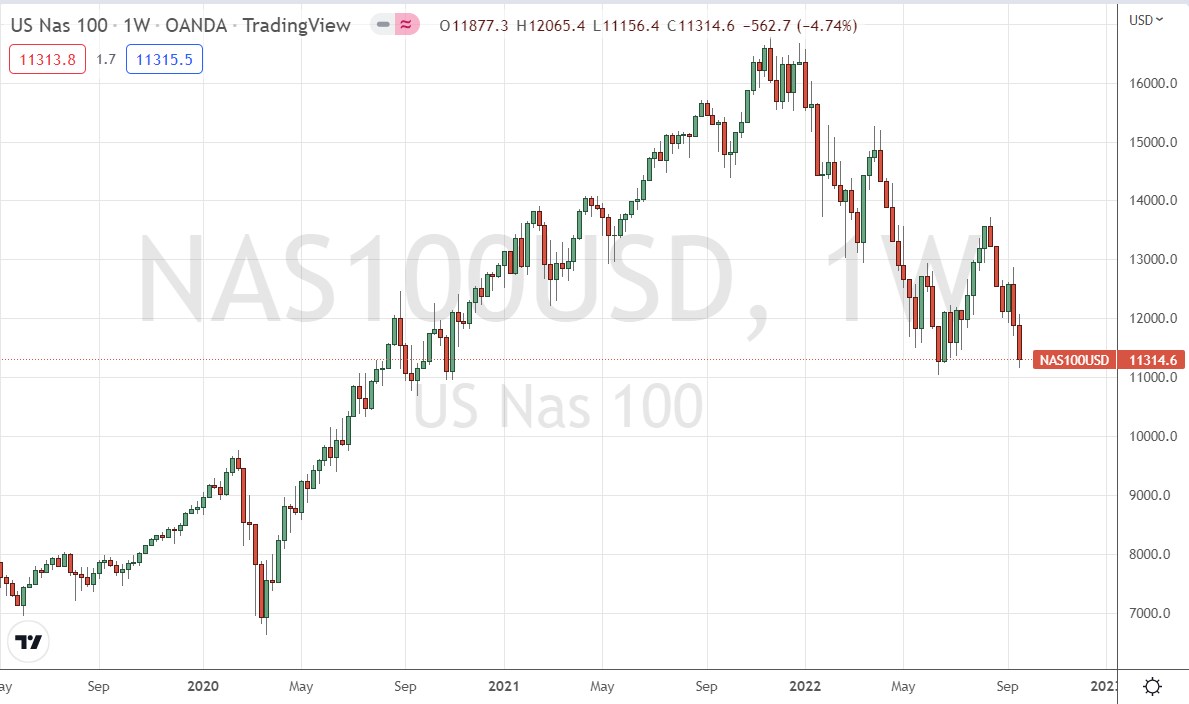 Last week saw the GBP/USD currency pair make a huge fall, printing an exceptionally large bearish candlestick which closed right on its low after declining by almost 5%. The price hit $1.0850, its lowest price since 1985, a 37-year record low. The price is now not far from $1.0540 which was its all-time low made in February 1985.

The price had been in a strong downwards trend due to a runaway US Dollar anyway before the Bank of England underwhelmed Thursday with a relatively small 0.50% rate hike, followed by a shock announcement of big tax cuts to be financed by a big increase in government borrowing. The market reacted by selling the Pound like crazy, it was the standout currency of the week, even more so than the USD.

The British Pound is beset by extremely high inflation at almost 9% and a weakening economy, with the Bank of England predicting a 5-quarter recession starting at the end of this year. Therefore, there are good fundamental reasons to seeing a good case for a short trade.

I am very happy to be short of this currency pair now, but bears should watch out for two things: 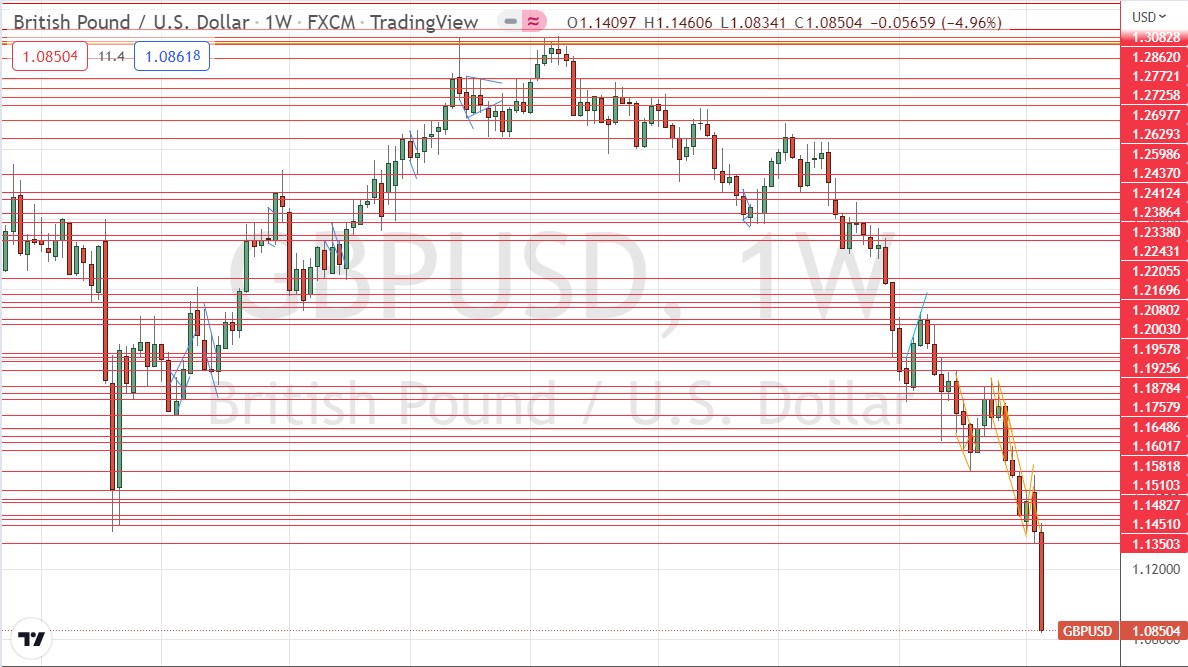 Last week saw the EUR/USD currency pair print a large bearish candlestick which saw the currency pair reach its lowest price since 2002. The price is trading in blue sky and ended the week very close to its low, and both are very bearish signs.

The Euro had held up above a supportive area at $0.9900 while other currencies were breaking down against the greenback, but this finally changed last week.

We see strong bearish momentum, and still lower prices are likely. As the price has not traded in this area since 2002, it is quite possible technically for the price to drop as low as the $0.8200 area, which is this currency pair’s all-time low. 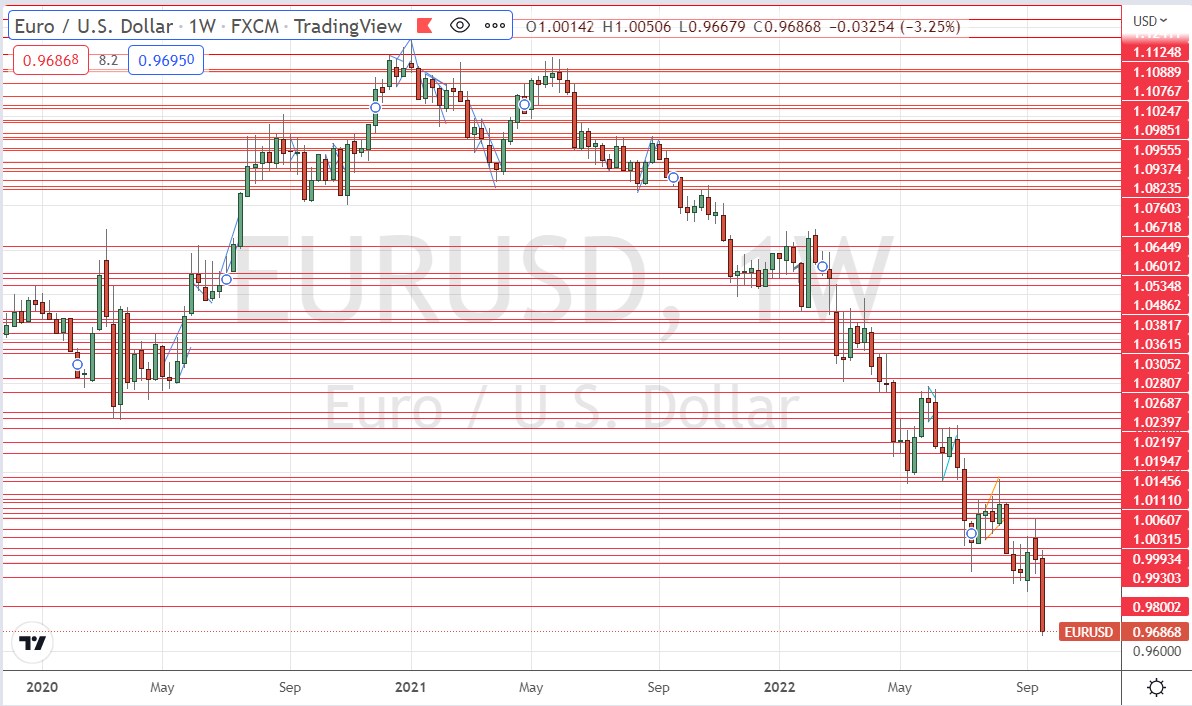 Last week saw the NZD/USD currency pair print a very large bearish candlestick which saw the currency pair reach its lowest price since the coronavirus panic of May 2020. The candlestick closed right on its low. This and the fact that the New Zealand Dollar dropped by more than most other currencies are bearish signs.

Despite the bearish picture, the technical situation is not fully bearish, as the price is “only” making a 2-year low. The price has yet to reach the area between $0.5450 to $0.5600, which could be very supportive as it acted as a strong inflection point in 2020.

It is interesting to note that the relatively high interest rate in the NZD is not saving it from declining to fresh long-term lows. 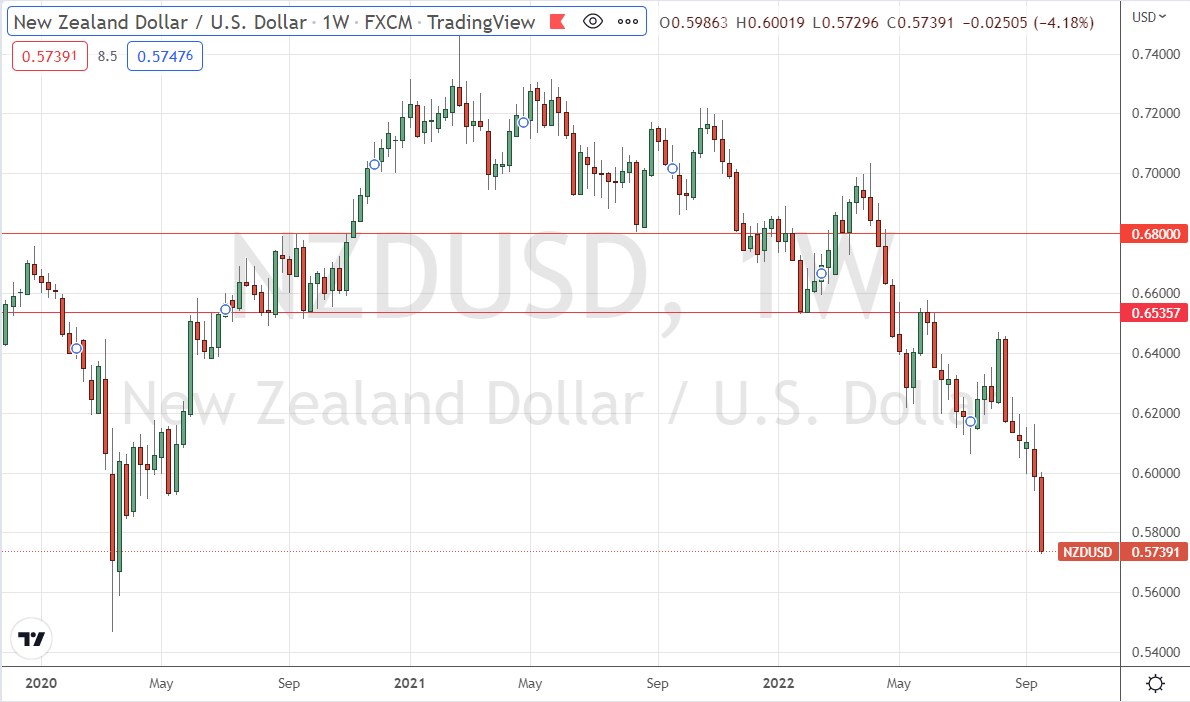 I see the best opportunities in the financial markets this week as likely to be short of the EUR/USD and GBP/USD currency pairs.

Ready to trade our Forex weekly forecast? Here’s a list of some of the best Forex trading platforms to check out.