The past week has been quiet in the markets, but has seen the risk-on, declining US Dollar trend continue as there is a growing expectation of a more dovish tilt from the Fed and other major central banks.

The difference between success and failure in Forex / CFD trading is highly likely to depend mostly upon which assets you choose to trade each week and in which direction, and not on the exact methods you might use to determine trade entries and exits.

So, when starting the week, it is a good idea to look at the big picture of what is developing in the market as a whole, and how such developments and affected by macro fundamentals, technical factors, and market sentiment. There are some valid short-term trends in the market right now, which might be exploited profitably. Read on to get my weekly analysis below.

The news is currently dominated by two issues – speculation as to the extent of a forthcoming “dovish pivot” by the Federal Reserve and possibly other major central banks, and measures taken by China to stimulate its economy.

Speculation over a more dovish Fed has been rampant since lower-than-expected US inflation data was released a couple of weeks ago, suggesting that inflation has finally begun to make a significant fall. This was boosted by the release last week of the minutes of the most recent FOMC meeting which showed that members are broadly expecting rates to peak in 2023 at approximately 5%, with perhaps another 1% or 1.25% of rate hikes left in this cycle. This speculation has helped bring the US Dollar again after it made multi-decade highs just a few weeks ago.

The central bank of China has lowered the reserve ratio required from Chinese banks, which will have the effect of releasing a potential $70 billion of additional liquidity into the Chinese economy. This is expected to boost Chinese stock markets when the begin trading this week, and it may boost currencies strongly related by trade such as the Australian Dollar also.

Markets ended the week with improving risk sentiment, with the US Dollar continuing to sell off and stock markets rising.

The other most important market news last week was mostly the 0.75% rate hike by the Reserve Bank of New Zealand, which took their interest rate up to 4.25%, the highest of any major currency right now. The RBNZ also forecasted that New Zealand will enter a year-long recession in Q3 2023. There was other data showing sales of services in the USA were weaker than expected, but that both services and manufacturing are doing a little better in the UK, Germany, and France than had been expected.

The Forex market saw greatest strength in the British Pound and the New Zealand Dollar last week. The weakest currency was the US Dollar.

Rates of coronavirus infection rose very slightly but remained at a historically low-level last week. Raw numbers have not been this low since the end of the first wave in the summer of 2021. The only significant growths in new confirmed coronavirus cases overall right now are happening in China, Japan, the UK, and Venezuela.

The coming week in the markets is likely to see a higher level of volatility, as there are several major data releases scheduled, some of which are likely to have a strong impact. The scheduled releases are:

The weekly price chart below shows the U.S. Dollar Index printed a bearish engulfing candlestick which represented another weekly fall. However, the support level shown in the price chart below at 104.92 has continued to hold – in fact, it was not tested, so this is ambiguous.

The long-term bullish trend in the US Dollar is in serious trouble and may well be over as we have finally seen inflation numbers which are declining meaningfully, suggesting that the Fed will not be under as much pressure to make further strong rate hikes – this is supported by last week’s Fed meeting minutes which hint at another 1% to 1.25% of rate hikes forthcoming this cycle. This is logically going to bring a lower value for the US Dollar, but higher values for stocks, commodities, and other risky assets.

Short-term direction in the US Dollar still looks uncertain due to this support level at 104.92, so it may be wise to stand aside from the Forex market this week, or to carefully look for short-term trades which do not involve the US Dollar, or which are short of the US Dollar. 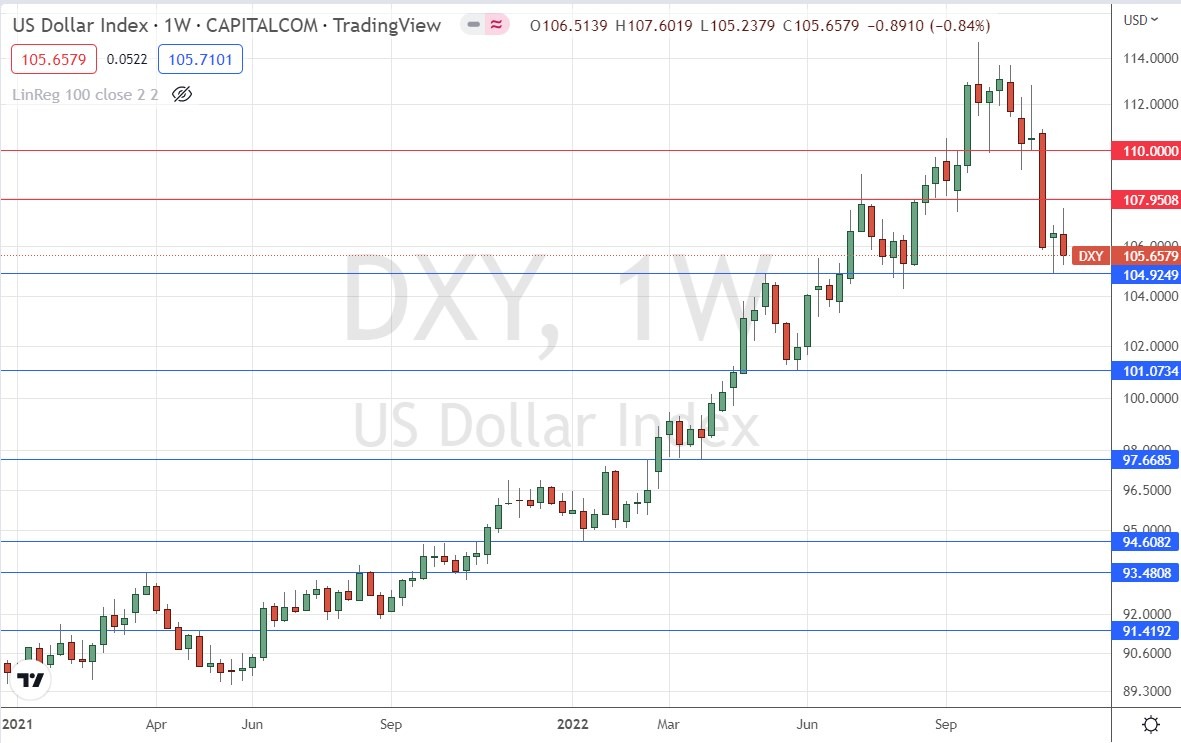 Last week saw the GBP/USD currency pair print a strongly bullish candlestick which closed above the previous week’s high, which is a somewhat bullish sign.

The strongly bullish long-term trend in the US Dollar is now likely over, and the Pound again last week showed some short-term strength, in fact it is one of the strongest major currencies.

I think that this pair will continue to rise provided the US Dollar is weak, with the Pound continuing to strengthen somewhat on above-average volatility. This could be jeopardized if the Governor of the Bank of England gives a very gloomy short-term picture in his public comments due this week. 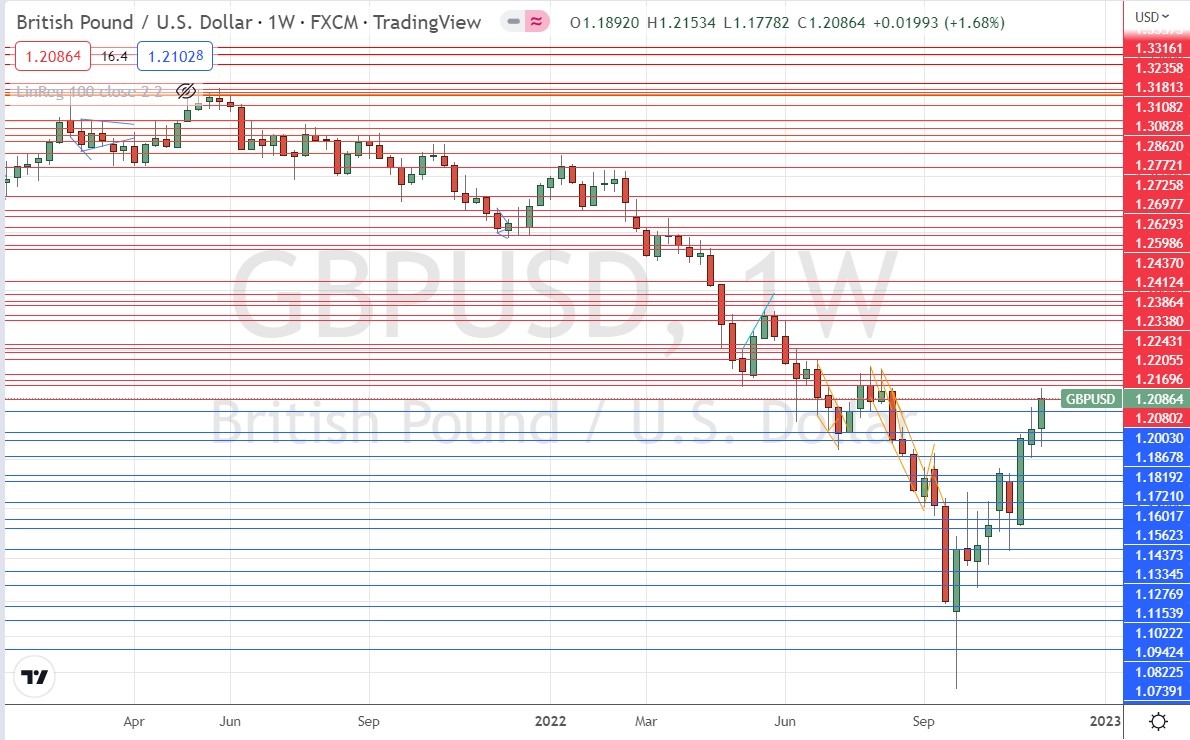 Last week the EUR/USD currency pair printed a bullish engulfing candlestick, but the candlestick did not break the high of the previous week’s range, so the bullishness seems subdued. It will be hard for bulls to be truly convinced here until the price gets established above the very key resistance level at $1.0486 or maybe the big round number slightly above that at $1.0500.

I think that this pair will continue to rise provided the US Dollar is weak, although the GBP/USD currency pair looks like the better vehicle for long trades over the coming week.

Ready to trade our weekly Forex forecast? Here are the best Forex brokers to choose from.