With preseason games starting across the NFL this weekend, Major League Baseball heading into the homestretch, and the NBA tipping off in two months, it’s a good time to start thinking about sports. We watch a lot of live sports, and that’s done wonders for fuboTV (FUBO -1.58%).

With more homes getting rid of their costly cable and satellite-TV packages, cord-cutters are turning to live-TV streaming services that duplicate the collection of dozens, if not hundreds, of popular cable channels and local TV stations in a single app. Alphabet‘s (GOOG 2.36%) (GOOGL 2.39%) YouTube TV and Disney‘s (DIS 3.30%) majority-owned Hulu + Live TV are the leaders in this niche, but fuboTV is gaining market share with its compelling platform that emphasizes live sports. It offers viewers access to more than 200 channels in most markets, and roughly three dozen of them cater to sports fans.

With fuboTV stock up 77% over the last eight trading days — and up 76% so far in August — it’s probably a good time to check on the platform that isn’t on a lot of investors’ radar when it comes to streaming-service stocks. The stock is clearly in a hurry-up offense mode. Let’s see if we can score before time runs out. 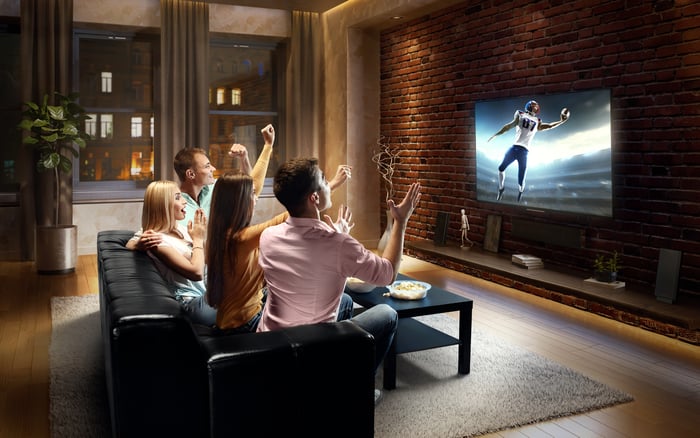 We’ll do it live

Live-TV streaming services don’t get the same kind of attention as more popular consumer-direct on-demand video platforms, and that’s fair. YouTube TV, Hulu + Live TV, and fuboTV have just 5 million, 4 million, and 1.3 million subscribers, respectively. The world’s most popular traditional streaming service Netflix has more than 220 million accounts worldwide. Hulu + Live TV’s sister service — Hulu — has more than 10 times the number of users than the namesake live-TV platform, and even Hulu is small potatoes to Disney+, with 152.1 million homes under its watch.

It’s also hard to turn a profit for fuboTV and its peers. The on-demand streaming services can curb their costs by controlling content costs. Live-TV streaming services are at the mercy of the rising carriage rights of the channels they offer. Cut a costly but popular live-TV channel out of your arsenal, and some customers will move on to a rival that still has it.

Disney and Alphabet’s Google are large enough to offset the losses elsewhere, but fuboTV is all in on live-TV streaming. The stock has been rallying this month, but it’s still down more than 90% from the highs it hit nearly two years ago. Starting lines matter before assuming that victory laps are in order.

What’s behind the recent gains? Last week’s earnings report was a potent launch pad. The results themselves were mixed.

Revenue rose 70% to $221.9 million, just shy of analyst growth projections. Net loss widened by 22% to $116.3 million, but the per-share deficit of $0.63 is the first time that fuboTV’s red ink clocked in kinder than expected in more than a year.

Its North American subscriber base has increased 41% over the past year. Hulu + Live TV has only grown its audience by 8% in that time. But fuboTV’s international user base has grown even faster, but it’s a fledgling platform that hasn’t been monetized as lucratively as it’s been closer to home.

There’s a lot of money to be made in selling premium-priced live-TV streaming services. North American subscribers are paying a monthly average of $64.51 for the platform, up 2% since last year. It’s generating $7.25 a month on top of that per member in ad revenue, but that’s down from $8.82 in this challenging climate for ad revenue. Also, fuboTV is lowering its full-year guidance for revenue and subscribers.

The report wasn’t great, but what got the shares going was fuboTV conceding that it’s exploring strategic opportunities for its wagering business. The company’s shares hit all-time highs around the holidays of 2020 as it began to take steps to offer its subscribers a way to gamble on live sporting events.

A pair of acquisitions had it pushing to roll out its own sportsbook, making it the only owned-and-operated app in this country that syncs betting with live-sports viewing in the same ecosystem. It’s been a challenging undertaking, and currently, fuboTV’s sportsbook is only legally available in two states.

The stock was initially bid up on the promise of offering wagering to its captive sports fans, but now, the market’s relieved to see that fuboTV may farm that out with a strategic partner. It would result in incremental revenue instead of a drag on its tricky path to profitability. The company has also announced a pair of content deals for new channels on its platform, but it’s really the shift in its approach to wagering that’s breathing new life into the once moribund stock that was hitting all-time lows last month.

The stock has a long way to go to return to its all-time highs, but it’s clearly having a strong month. Starting lines matter. Finish lines matter, too.