Zee Business Stock, Trading Guide: Domestic stock markets continued their losing streak on Tuesday witnessing their fifth straight loss. However, the loss was marginal, unlike what has been happening over the last four trading sessions. The BSE Sensex ended at 57,107.52, down by 37.70 points or 0.07 per cent. Meanwhile, the Nifty50 ended at 17007.40, down by 8.90 or 0.05 per cent.

Indian markets opened on a positive note taking cues from Dow 30 futures only to concede the advantages as the trading session progressed.

Out of the 15 sectoral indices, 9 closed positively. Nifty Oil & Gas (1.13 per cent) was the biggest gainer followed by Nifty IT and Nifty Pharma, which were up nearly 1 per cent from the Monday closing levels.

There was stock specific action in broader markets with Nifty Mid Cap 50, Nifty Mid Cap 100 and Nifty Small Cap 100 ending in the green.

Things to watch out for when markets reopen on Wednesday:

1) RBI Monetary Policy: The all important Reserve Bank of India Monetary Policy Committee meeting begins tomorrow. The three-day meeting will be followed by the announcements by Governor Shaktikanta Das on Friday. The Central Bank is expected to increase rates by 50 bps.

2) Rupee Vs Dollar: Indian rupee broke its four-day losing streak on Tuesday and settled 14 paise higher at 81.53 against the US dollar, PTI reported. It opened strongly only to later give its early gains. The local unit opened at 81.45 against the greenback. It witnessed an intra-day high of 81.30 and a low of 81.64 during the session. “The focus will be on the durable goods and consumer confidence numbers that will be released from the US. We expect the USD/INR(Spot) to trade sideways and quote in the range of 81.20 and 81.80,” the report said quoting Gaurang Somaiya, Forex & Bullion Analyst, Motilal Oswal Financial Services said. Rupee has lost 193 paise against the American dollar over the previous four sessions, the report said.

3) US Markets: Wall Street was buzzing with activity with top indices trading in the green at the time of filing of the story. Dow 30 was trading at DOW 30 was trading at 29,288.80, up by 27.99 points or 0.10 per cent. Meanwhile, S&P 500 and Nasdaq Composite were also up by 0.28 per cent and 0.72 per cent around this time. Gold and Silver were also trading positively on Comex. Today’s closing along with Dow 30 Futures on Wednesday could determine how markets open tomorrow. 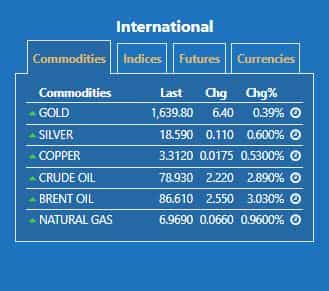 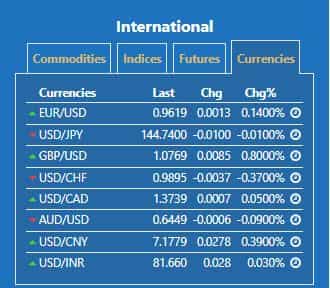 8) The market is now into an uncertain territory amid strengthening Dollar and weakening rupee, market Expert Shrikant Chouhan of Kotak Securities told Zee Business. It would take some time for markets to become stable, he said. He said that the market is oversold and may see a rebound. His stock to buy is Axis Bank for a price target of Rs 800 and a stop loss of Rs 715. His view on this stock is for positional term.

9) Stock Market Expert Nilesh Jain said that the markets remain oversold and may see a bounceback soon. He recommends a strategy for investors on Nifty50 and Nifty Bank. Nifty has support between 16850 and 16940. He sees resistance between 17150 and 17200. He expects a pullback of 200 points in the near term. On breaching 17360 an upside between 17700 and 17800 will open. Jain, who is Assistant Vice President, Derivative and Technical Research at Centrum Broking sees immediate support on Nifty Bank at 3790. If this is breached downwards, an 800 point downside will open, he added. The resistance is een at 38700-39000.

11) Economy: Economic affairs secretary Ajay Seth on Tuesday dismissed the concerns over depletion of forex reserve as “overblown” and said India has fairly large reserve to tide over the current situation. Foreign exchange reserves were down for a seventh continuous week, dropping to USD 545.65 billion on September 16. The reserves, which have been dipping as the central bank deploys the kitty to defend the currency amid a pressure caused majorly by global developments, had declined by USD 2.23 billion to USD 550.87 billion in the previous week. “There has been a depletion as inflows have come down and trade deficit is higher…I don’t see this as a concern, India has fairly large reserves to tide over this situation,” Seth said. PTI

(Disclaimer: The views/suggestions/advises expressed here in this article is solely by investment experts. Zee Business suggests its readers to consult with their investment advisers before making any financial decision.)